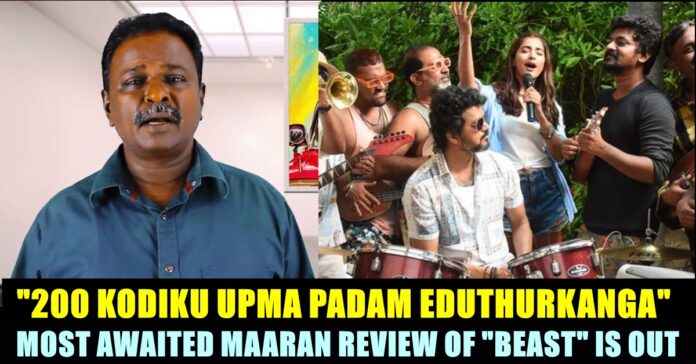 The Most Awaited “Beast” Review Of Blue Satta Maaran Is Out!! WATCH

“Beast” review of Blue satta Maaran who is known for ripping commercial movies apart is out now. For the film which was released on 13th of April, Maaran uploaded a 6 minute review in his YouTube channel Tamil talkies with a handful of advertisements. As usual, the film reviewer, throughout his review, pointed out how flawed the Nelson Dilipkumar directorial is.

The film didn’t impress critics and general audience due to it’s weakest screenplay and a plot that has no connection with the current affairs. Maaran, in his review said that it is a story that Vijayakanth and Arjun threw away years back.

“This is a serious story. If you ask whether they wrote a screenplay in a serious tone, no. Nelson is a filmmaker who is known for his comedy sense but the film lacks comedy as well. They shot something as per their wish. Terrorists who are shown in the film are acting like an amateur as it is first day of their job” trolled the film reviewer.

“But the hostages looks experienced as they are properly sitting in a line and co-operating the terrorists. In the whole film, the terrorists would have shot one ton of bullets and no bullet touches the protagonist” Maaran said.

“When we think that the film got completed, Vijay starts operating a flight like it’s some video game. They made a ” Upma” film which is expected to do a business of rupees 200 crores. They say there are only 200 people caught in a mall as hostages. In a mall, the number of employees alone will be higher than 200″ he pointed out.

Maaran also said that there was no “one to one” fight for Vijay in the film. However, Maaran concluded that the only positives of the film are two songs of Anirudh Ravichander, dance performance of Vijay and VTV Ganesh’s comedy.

Previous article“Arabic Kuthu Song Onnu Pothum” – Actress Got Trolled For Her Tweet
Next articlePriya Bhavani Shankar’s Fitting Reply To A Follower Who Asked About Her Bra Size!!

Actress Vidyullekha Raman, popularly known as Vidyu Raman's body transformation is one of the most significant transformations in Kollywood film industry as far as...