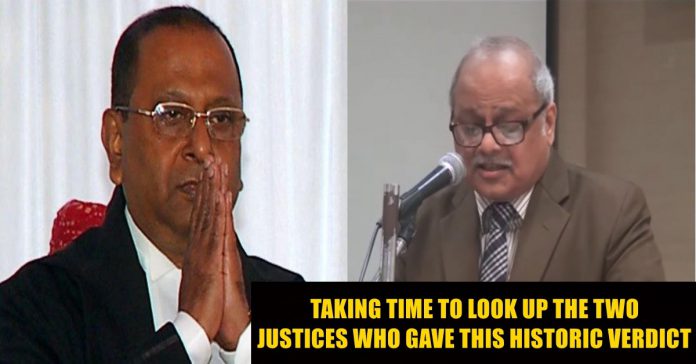 The two Bengal based judges Justice Pinaki Chandra Ghose and Justice Amitava Roy, on February 14th 2017 sentenced an important judgement which would supposedly be expected to rattle the entire of Tamil Nadu’s politics. With huge talks going around the verdict, Sasikala and Panneerselvam, let’s take few seconds to look at the two Justices who announced this historical verdict.

The 64-year old Justice Pinaki Chandra Ghose hails from a prestigious background of Justices. His father late Justice Sambhu Chandra Ghose was the former Chief Justice of the Calcutta High Court. After graduating from Kolkata’s St. Xavier’s College, Ghose got his law degree from Calcutta university. He later went on to obtain Attorney-at-Law at the Calcutta High Court.
Beginning his career as an advocate in the Bar Council of West Bengal in 1976, he went on to become a permanent Judge in the High Court by 1997. Adding to his achievements as a lawyer was his post of Executive Chairman of the Andaman and Nicobar State Legal Services Authority. Justice Ghose has also served as member of the National Legal Services Authority.

Later by December 2012, he went on to become the Chief Justice of the Andhra Pradesh High Court before being elevated as judge with the Supreme Court of India next year. He is due to retire on May 27, 2017.

The 63-year old Justice Amitava Roy also belongs to a family of lawyers. His father late Anadi Bhushan Roy was a senior advocate in Assam. His brother-in-law Justice Dipankar Dutta is a sitting judge of the Calcutta High Court. He earned his degree in law from Dibrugarh University in 1976 after completing his post graduation in Physics,. He began his legal career after enrolling with the Bar Council of Assam, Nagaland, Meghalaya, Manipur, Tripura, Mizoram and Arunachal Pradesh the same year. In 1981, he began practicing before the Gauhati High Court and has also appeared before the Central Administrative Tribunal in Gauhati.

Between 1991 and 1996, Justice Roy served as a senior advocate of the Arunachal Pradesh government at the Gauhati High Court. He has also been a member of Assam Law Commission. In 2002, he became a judge at the Gauhati High Court and in 2013 he was elevated to the post of the Chief Justice of Rajasthan High Court. He has also served as Chief Justice of Orissa High Court before being elevated as a Judge at the Supreme Court of India in 2015.