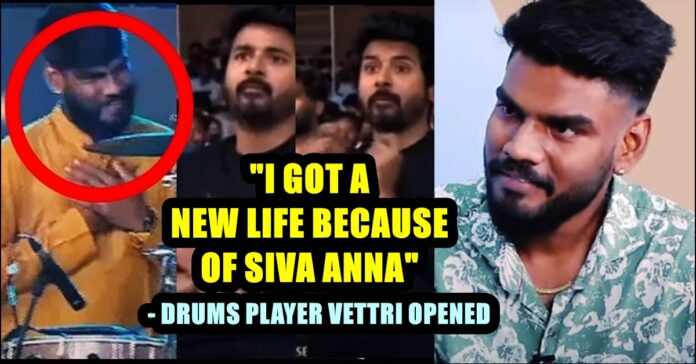 Drums player Vettri who got recognized by Sivakarthikeyan in the “RRR” event, appeared in an interview with an youtube channel and talked about how he felt when the star asked Mirchi Vijay to recognize him. He thanked Sivakartikeyan with his whole heart and also admired on how he notified Vijay without making him feel embarrassed or disrespected. Vetttri also said that he know Sivakarthikeyan from Super singer days and the fact about himself playing drums for the actor’s chart buster “Karuthavanlaam Galeejam” from “Velaikaaran”.

A kind gesture of Tamil star Sivakartikeyan at the “RRR” pre-release event won the hearts of fans. He who took part in the promotional event of Ram Charan- Junior NTR starrer, while sitting with prolific filmmaker SS Rajamouli, gestured anchor Vijay to mention the drummer and appreciate him. The actor who became an actor after years of hard work as an anchor, didn’t forget the past and recognized a true talent. There is no need for the star to take note on whether the drummer gets his recognition or not but the humble gesture of the emerging star won the hearts of many of the online users.

Before becoming one of the highest paid actors of Tamil cinema, Sivakarthikeyan did hosting for many years as well. Now, the 36 year old actor took part in the pre release event of SS Rajamouli’s “RRR” and gave a speech praising the filmmaker and the actors starred in it. Siva said that he would watch the film in FDFS and promoted the film by saying that SS Rajamouli is one of his favourite filmmakers and he admires his hubmle nature despite of achieving huge successes.

While Siva was sitting with the filmmaker himself, Vijay who was hosting the show, thanked all the artists who decorated the show with their skills. When he forgot to mention the drummer, Siva gestured to Vijay, his Don co-star to mention him after which the latter made the audience applause for the musician.

Now, in an interview with a private youtube channel, the drums player expressed his gratitude. Talking about the struggles faced by an anchor while hosting a big show like “RRR”, Vettri said that Sivakarthikeyan know aboutt it as he went to top spot from such a place. “A host will be hearing instructions from talk back, they will also should read out the sheets they are having and should cover the audience as well. They will be having lot of things to do and it is normal to forget few things” Vettri said.

“Siva Anna knows about it because he reached that spot from scratch. He didn’t convey it in a harsh way and didn’t do it in a softest way as well. He just signalled it and made Vijay understand” Vettri admired in the interview.

He shared that moment❣️
How @Siva_Kartikeyan addressed him 💯

Vettri also talked about how long he has been familiar with Sivakarthikeyan. He said that he was playing drums in Super singer sow while Sivakarthikeyan was hosting it. He also shared about the experience of playing drums for Siva’s opening song in his “Velaikaaran” movie.

Tamil Nadu Dalit Youth Thrashed By A Group Of Men !! CAUGHT ON CAMERA

On Wednesday, a video of a Dalit youth getting brutally assaulted by a gang of six men went viral in social media. After the...