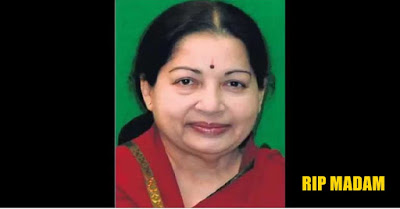 The Chief Minister who had been admitted to the Apollo Hospital, Greams Road passed away on December 05 2016 owing to a cardiac arrest the previous day. She was on ecmu life support since then.

She was admitted owing to lung infection on September 22,2016 after which she got repeated organ failures. A continuous array of treatment made her health condition improvise at a slow rate after which she was announced healthy and recovering quickly a week back. But she was held back at the hospital for further nourishment.

But the sudden cardiac arrest on December 04,2016 worsened her condition which ultimately proved to be fatal on December 05,2016 and eventually she decided to take an immortal ascent leaving millions of her worthy followers behind.

The announcement was issued right on the middle of the night whereas her death is expected to have occurred around 5:30 the previous evening. She is now laid down at Rajaji hall for final honoring. The state has run into a mourning period for a week after which it was declared holiday for all institutions for three days.