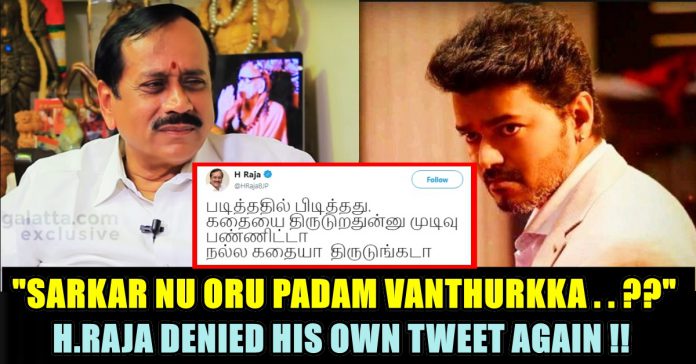 A remark was posted from the verified Facebook page of BJP National Secretary H Raja, stating, “Who is Lenin? What is his connection to India? What is the connection of communists to India?” Lenin’s statue was destroyed in Tripura. Today Lenin’s statue, tomorrow Tamil Nadu’s EVR Ramaswami’s statue. As soon as the DMK opposed the comment, H Raja distanced himself from the Facebook post and said that the page was maintained by various administrators. The post was soon deleted. It is also believed by people that the film Mersal’s major promotion was nothing but the political stunts of BJP party members including Tamizhisai Soundararajan. As it is been that way in the past now H.Raja posted a tweet which is blatantly criticizing the movie “Sarkar”.

H.Raja Tried To Troll “SARKAR” But It Completely Went Wrong !! Check Out The Hilarious Reactions !!

Now a video has been released in Galatta youtube channel in which the politician denied that he is not mentioned the movie’s name which implies he did not talked about the film but he liked the quote that he seen somewhere. When the interviewer asked about the film “Sarkar” Raja said ” I did not know any movie that released in the name of Sarkar. All the Sarkar i know about is the Edappadi sarkar and Modi sarkar.” Though the interviewer repeatedly insisted him to talk about the tweet he posted Raja at point denied that the tweet was not posted by him.

From Mahesh Babu To Narendra Modi, Entire India Wished Superstar For His Birthday !!

Superstar Rajinikanth is celebrating his 70th birthday on Saturday and is all set to launch his political party in a couple of weeks. Known...

On seeing young and emerging actors such as Harish Kalyan, Kalidas Jayaram making their relationship public, a Twitter user, on Sunday uploaded a meme...