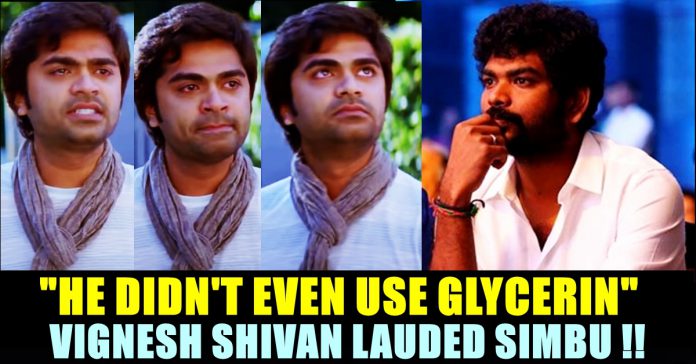 Director, Lyricist and upcoming producer Vignesh Shivan appeared in an interaction after a long time amidst lockdown and shared about his experience in film industry since his debut directorial “Podaa Podi”. He who shared about his marriage plans with Nayanthara, also expressed his love towards his best friend Anirudh in the interaction. While talking about a particular scene in “Podaa Podi”, Vignesh Shivan lauded Simbu for his acting skills.

Vignesh Shivan debuted to Tamil film industry through Simbu’s “Podaa Podee”. The filmmaker developed a romantic relationship with Nayanthara during the making of his second film “Naanum Rowdy Dhaan”. After the success of Naanum Rowdy Dhaan, Vignesh Shivan directed actor Suriya in “Thaana Serntha Kootam”. He also started a production house with Nayanthara and named it as “Rowdy Pictures” with which he is producing “Nettri Kann” by having Nayanthara in the lead role.

When he was asked to share about the writing and shooting experience of a scene in “Podaa Podi” where Simbu would break down after his child’s demise, Vignesh said that the full credits of the scene has to go to Simbu. “Full credits should go to Simbu sir. He elevated the scene to the next level. While writing, I didn’t expect it to be a special scene as it went with the story’s flow. ” said Vignesh.

“We shot those scenes in London. When we were preparing to shoot the scene from 3 O clock, Simbu sir asked me to give him time. He took 30 to 45 minutes to get prepared for the scene’s mood. Then he came and performed the scene in single shot. Without glycerin, looked he was crying while performing. That scene will always be an example to prove how good Simbu as an actor is.” said the filmmaker in the interaction.

watch the video of the interview here :

“Even now people will share the clipping of the scene whenever the film streams in TV. Gautam sir also liked the scene very much and said it to me. Cinematographer was a foreigner. He who doesn’t know the language, appreciated the scene as it connected to him” Vignesh added.

Vignesh also explained how the interval scene in “Naanum Rowdy Dhaan” was made. While talking about his best friend and music director Aniruth, Vignesh Shivan said that he loves him very much as much as he loves Nayanthara. On the wort front, Vignesh Shivan is all set to go on floors for his “Kaathu Vaakula Rendu Kaathal” which is going to have Vijay Sethupathi, Nayanthara and Samantha in the lead roles.

Under his “Rowdy Pictures”, Vignesh shivan is producing a film named as “Nettri Kann” and said that he wants to give opportunities to young talents like how Danush and Sivakarthikeyan are using their production houses.