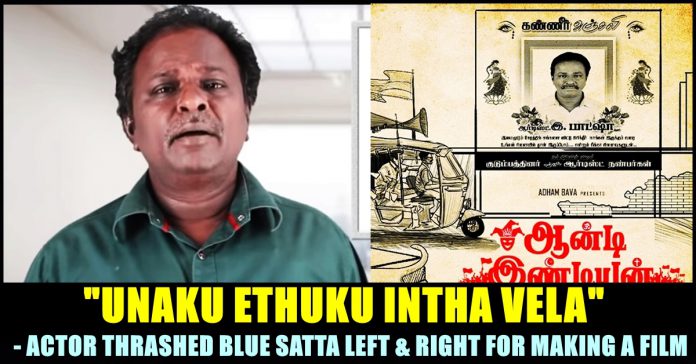 In the trailer launch event of his debut film “Anti Indian”, “Blue Satta” Maaran opened on how actor R.K Suresh thrashed him when he shared about his first film to him. The movie reviewer said that he has been promoting R.K’s VIP hair colour shampoo product for a long time and met him regarding payment. When he shared about the details on directing his first film, R.K literally lowered his confidence level, said Maaran. After meeting the “Ellam Avan Seyal” actor, Maaran postponed the shooting of his film for 3 months. RK is known for acting in films such as “Avan Ivan”, “Jilla”, “Puli Vesham” etc. He is also a renowned producer.

Trailer of “Blue Satta” Maaran’s “Anti Indian” released in the youtube channel of the latter’s youtube channel “Tamil talkies” through which he enjoys million plus followers. The trailer promised a political satire based on the death of an individual who belongs to Muslim religion. The story seems to be revolving around how the representatives of all the religion playing politics, even in disposing a dead body.

After completing direction for his debut film “Ant Indian”, Maaran faced issues at the censor board which declared that the film got refused. However, with the help of court, Maaran got U/A for his film and is all set to start promotions for it by releasing the trailer. In a recent press meet, he made it clear that his film is going to be a theatrical release, before OTT streaming.

Now, in a recent press meet that took place for the trailer, Maaran opened about how actor R.K demotivated him when he shared about his movie to him. “After sharing that I am going to direct a film, he looked at me like I am a some kind of animal. He asked me why I am involving myself in this kind of job. When I replied to him that the story will sound good, he said that my fate is to troll films and earn money through it and questioned me why I am giving content to them (movie producers and directors)” Maaran said. RK Suresh

“He scolded me for 10 long minutes. At that time, I was planning to go for shoot in one month. After meeting R.K Suresh, I postponed it for 3 months. I started narrating stories to many people after that” Maaran said in the press meet.

Previous articleCelebrities Mourning For The Demise Of This Veteran Actor !!
Next article“Please Don’t Release This Film” – Priyanka Fans Got Upset After Watching This Teaser

BIGG BOSS Vaishnavi Shared Screenshots Of People Abusing Her !! Here’s How She Replied !!

Kane Williamson, the captain of New zealand team won the hearts of millions for his gesture in the finals of world cup 2019. In...