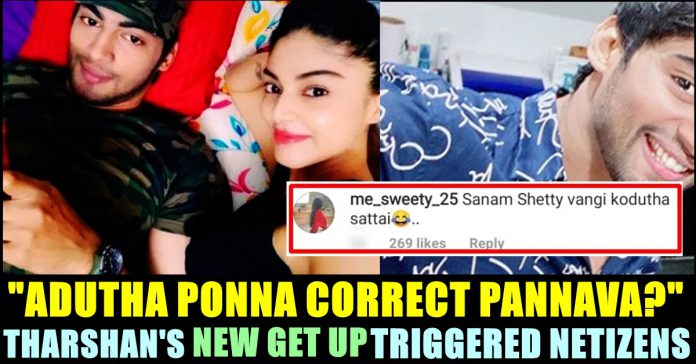 Tharshan’s latest post on his official Instagram account triggered netizens to express their hatred against him like never before. After the controversy with Sanam Shetty, it is never the same for the Bigg Boss sensation who once had zero haters. The aspiring actor posted a couple pictures of himself with a slight change from his regular looks and added a caption thanking his stylist.

“Thank you so much for the make over bro” read Tharshan’s caption for the post. Check out his post below :

Thank you so much for the make over bro @devsakthivel

To this post, many of his 8 lakh followers, posted negative comments asking whether the shirt Tharshan wearing was gifted by Sanam shetty, ex-girlfriend of Tharshan who accused him for betraying her. Few even questioned Tharshan if he is getting ready to fall in love with another girl. Check out some of their reactions below :

It all started when Sanam Shetty registered a complaint against Tharshan by accusing him for cheating, fraudulent, breach of trust, women harassment and threatening in the commissioner office, Chennai. This made Tharshan to gather media to give clarification. In the press meet, Tharshan denied the allegations against him and tried to justify himself in front of the reporters.

Tharshan has said that he bought no money from her and paid back the only three and half lakh rupees she spent for him after he received the payment from Bigg Boss. He further added that Sanan Shetty blackmailed him to kill herself and demanded him to declare her as his fiancee in front of media. “I didn’t like the bikini interview she gave to a youtube channel. Once in a night party, I heard about her behaviour with her Ex-boyfriend through former Bigg Boss contestant Ramya and Sathya. I won’t file complaint against her but will produce the proofs in commissioner office if it is required” he said.

What do you think on these comments received by the Bigg Boss star ?? Comment your views !!

A.R Rahman who is not very much active in interacting with press and media, has conducted a press meet for most probably the first...

Milind Soman who is known among Tamil film audience through films such as "Doctor", "Pachaikili Muthucharam", "Paiyaa", "Alex Pandiyan", got married to Ankita Konwar...

Saravana Bhavan, the largest South Indian restaurant chain in the world, is now accused of forcing employees against their will. The 39 year old...