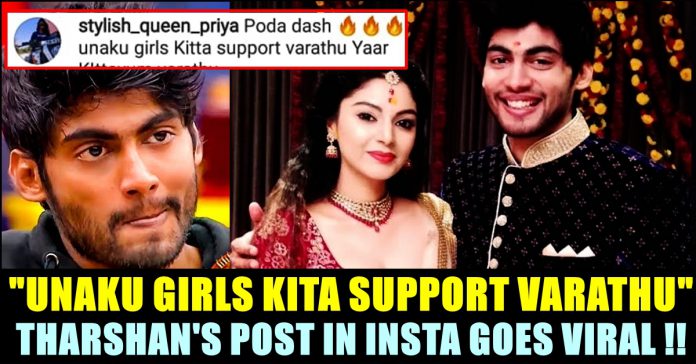 Tharshan made his first ever social media appearance after Sanam Shetty issue today. The aspiring actor wrote a long post to let his emotions out to his fans and followers. In his post, Tharshan said that he has utmost respect towards Sanam shetty. However he said “Being in an unhappy relationship for whatever reason is not right and there was never any intention to hurt.” through his post. The Bigg Boss star added that he got deeply hurt by the recent happenings and took break from social media for that reason. He even said that none of the allegations of Sanam Shetty are true.

Check out the post and caption of Tharshan here :

Relationships fail for whatever reasons and that is between those two people. If one or both are unhappy then the realistic choice is to go seperate ways amicably before things become too difficult. Being in an unhappy relationship for whatever reason is not right and there was never any intention to hurt. I had the utmost respect for this person but things became unhealthy and they couldn't accept that reality and set out to purposely destroy me. None of the allegations have been true and my personality has been put on trial by the media and those who do not know the truth or facts. I am deeply hurt by this and took time away from social media etc for this reason. Setbacks happen in life but I have learned from this and am now more than ever focused on the future and my career. Thank you so much to those who stood by me no matter what and for that i am eternally grateful.

Few days ago Sanam Shetty registered a complaint against Tharshan by accusing him for cheating, fraudulent, breach of trust, women harassment and threatening in the commissioner office, Chennai. This made Tharshan to gather media to give clarification. In the press meet, Tharshan denied the allegations against him and tried to justify himself in front of the reporters.

Tharshan has said that he bought no money from her and paid back the only three and half lakh rupees she spent for him after he received the payment from Bigg Boss. He further added that Sanan Shetty blackmailed him to kill herself and demanded him to declare her as his fiancee in front of media. “I didn’t like the bikini interview she gave to a youtube channel. Once in a night party, I heard about her behaviour with her Ex-boyfriend through former Bigg Boss contestant Ramya and Sathya. I won’t file complaint against her but will produce the proofs in commissioner office if it is required” he said. (Also Read : Tharshan’s Clarification For Sanam Shetty’s Accusation !! WATCH)

However, after seeing his today’s Instagram post Tharshan mostly received positive comments. A separate set of his followers expressed their hatred towards him as well. One of his follower asked Tharshan whether the post was written by Abhirami or Sherin, in a way of mocking him. Check out some of their reactions below :

Popular Tamil youtuber Madan Gowri facing the wrath of Super star Rajinikanth fans for uploading a tweet that conveyed the message about the latter's...

AB DE villiers yesterday revealed about the long time controversy about his participation in the world cup as a player. The south african cricketer...

A picture of a page from the text book of Sociology for Nurses gone viral in social media platforms and left public in a...

Team India registered a historic win in the Australian soil through their terrific performance in the second test that took place in the Melbourne...

Followed by the several names that are doing rounds among the Internet users regarding the 15 celebrity contestants of the upcoming BIGG BOSS ...