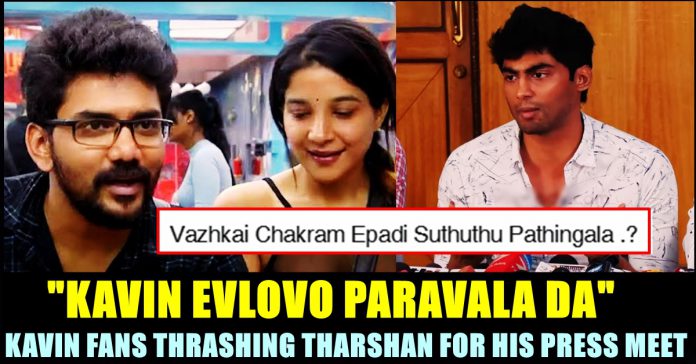 Sanam shetty’s complaint in commissioner office against Bigg Boss sensation Tharshan has made him to gather media to give clarification. The aspiring actor has denied allegations against him and tried to justify himself in front of the reporters. Popular model and actress Sanam Shetty, a police complaint against the aspiring actor has been filed by the model. She has filed complaint against Tharshan for cheating, fraudulent, breach of trust, women harassment and threatening in the commissioner office, Chennai.

The actress even produced photograph proofs in front of media and said that Tharshan is treating her badly in the presence of his friends after coming out of Bigg Boss house. “He even accused me of having illicit relationships with the actors I am working with. “From the very first day we met, I have been an actress. Now he reasons my occupation to part with me” worried Sanam Shetty. (Watch the video of her interview here)

Now to defend himself, Tharshan has said that he bought no money from her and paid back the only three and half lakh rupees she spent for him after he received the payment from Bigg Boss. Tharshan said that Sanan Shetty blackmailed him to kill herself and demanded him to declare her as his fiancee in front of media. “I didn’t like the bikini interview she gave to a youtube channel. Once in a night party, I heard about her behaviour with her Ex-boyfriend through former Bigg Boss contestant Ramya and Sathya. I won’t file complaint against her but will produce the proofs in commissioner office if it is required” he said.

Meanwhile fans of actor and Bigg Boss contestant Kavin started expressing their hatred against the Srilanka based model. They are stating that their idol is way more better comparing to Tharshan which is evident in the micro blogging social media site. Check out some of their comments below :

I believed Kavin & He never ever betrayed Us . Unmai matum Alwys✌🏻

Proud That I Stan #Kavin ❤️

Kavin informed Losliya about his past and future life in a National Television and then there is Tharshan who hide the fact that he's engaged to Sanam Shetty. 😂 Levels ahead.

Kavin is better than tharshan…

What do you think on the justification provided by Tharshan ?? Comment your views !!

Previous articleOfficial Confirmation On Kavin-Losliya’s Relationship Status !!
Next article“You Belong To DMK?” Asked Follower To Anjana For This Reason !!