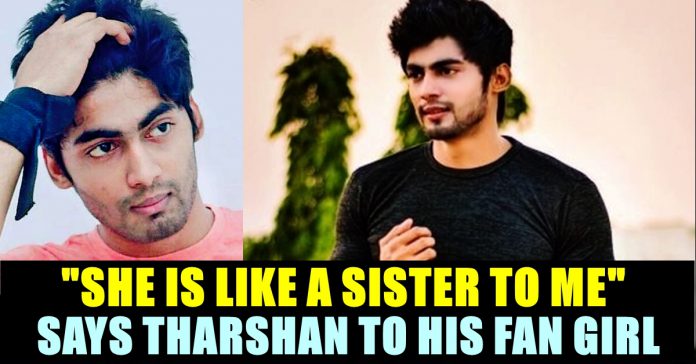 Tharshan Tried To Stop Fight Between His Fan Girls !!

Tharshan is one of the most loved male contestant during the Bigg Boss show, failed to win the title as got evicted from the show abruptly due to lack of votes. The Srilanka based model impressed audience from day 1. He got more attention when he bravely confronted Vanitha Vijayakumar, one of the experienced and dominant contestant inside the house.

Tharshan has became a heartthrob among young girls for his charming looks and he attracted family audience for his brave behaviour inside the Bigg Boss house as well. He also grabbed attention for being so similar to Atharvaa. Though he failed to win the trophy, the aspiring actor won many hearts which is evident through his social media accounts.

Tharshan is the only contestant in all the three seasons to get an opportunity from Kamal Haasan himself. During the finals, Ulaganayagan said that he got recognised as a talent by his production company Rajkamal International. Rumours also stated that he is going to appear soon in big screen under Raajkamal films. Now Tharshan is keeping his fans busy by posting his pictures from various photoshoots.

Having more than 8 lakh followers in Instagram, Tharshan is very much active in the photo posting social media platform. Recently, the model posted a photo of himself in his Instagram account with a caption saying “It does not matter how slowly you go as long as you do not stop”

This post from Tharshan received nearly 1 lakh likes and as many as 300 comments surfaced under his post. Meanwhile one of a follower of Tharshan appreciated his picture by saying “Handsome ❤️ anna🔥”. Unexpectedly this comment instigated a little bit of furore between herself and another Instagram user who commented something abusive and deleted it instantly.

However, those who involved in the verbal spat continued to comment on his post in a way of defending themselves.

During his Bigg Boss stint, Tharshan revealed that he is in relationship with Sanam Shetty who is also a popular model in tamilnadu. The actor is very soon expected to make his debut in Kollywood industry. What do you this reply of Tharshan ? Comment your views below !!

JUST IN : “Varisu” Is A Copy Of This Hollywood Film ??

The most awaited first look of Vijay's 66th project got released a day ahead of his 48th birthday. Titled as "Varisu", the poster is...