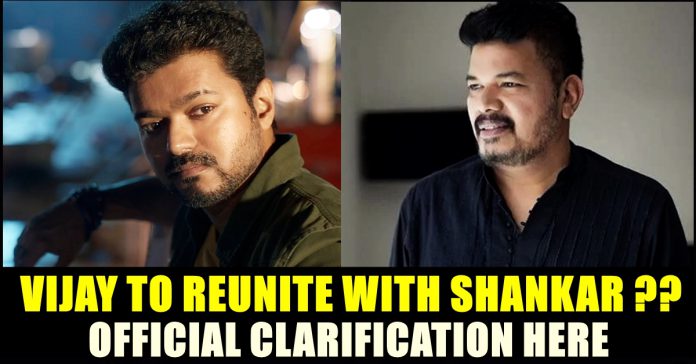 Actor Vijay who was last seen in Atlee’s Bigil, is about to appear in Lokesh Kanagaraj’s “Master” in coming April. Now the most talked about topic among Vijay fans is about who is going to direct the next film of their favourite actor which they call as “Thalapathy 65”.

The fan who shared the screenshot of the whatsapp chat wrote “Director conformed @shankarshanmugh 🔥 thank you for ur reply bro @Jagadishbliss” Check out the post below :

Jagadish who saw the post, immediately replied back with a denial saying “That’s not mine at all. Someone photoshopped..”

Shankar is busy in directing the sequel of his blockbuster film “Indian” with Kamal Haasan. He earlier made “Nanban” with actor Vijay which is an official remake of “Three Idiots”. Actor Vijay is one of the very few actors who has huge fan following in South India. Having acted in more than 60+ films, he is in the top race to become the highest paid actor in Kollywood.

Check out some of the reactions for his clarification below :

Having a loyal fan following in all age groups, Vijay always suggested his fans to ignore negativity. His fans backed the actor during his hard times. Be it a release problem or bad reports, Fans of the actor never failed raise their voice for their idol.

RJ Balaji Reveals The Moment When He Felt Ashamed Of Himself !! Watch Video !!

After hearing about the series of accusations from Kamal Haasan through reporters, Tamil nadu chief minister Edappadi K Pazhaniswamy trolled Kamal Haasan and the...