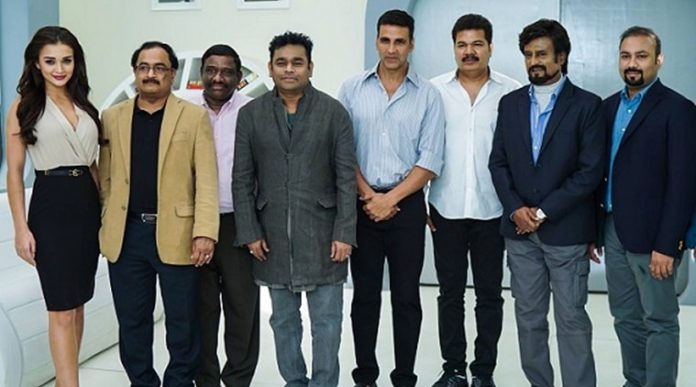 The Rajinikanth- Akshay kumar- Amy Jackson starrer movie, Robot 2.0 is all set to launch the audio  on Friday, October 27 of this year at Burj Khalifa, Dubai. It is believed that Ulaganayagan Kamal Haasan has been invited as the chief guest for the event and Director Shankar and Lyca Productions  is waiting for the legend’s acceptance of the invitation. It has been told that A.R. Rahman,at burj Khalifa will voice all the songs that will be featured in the movie. All the tickets for the event were sold within very few hours, as the audience are eagerly looking forward for the live performance of the legendary musician.

There has also been a talk which says that that the movie has been taken on budget of INR 400 crore. The movie links Superstar Rajinikanth and director Shankar for the third time. Apart from Akshay Kumar, Adil Hussain and Sudhanshu patel are playing negative roles in the film. The film’s worldwide premiere is scheduled on 25th January 2018 and as of now, across the globe 15 studios are working on different portions of the film.

None of the eight IPL teams shortlisted Kerala based fast bowler S Sreeshanth in their team. The cricketer who recently made his comeback to...