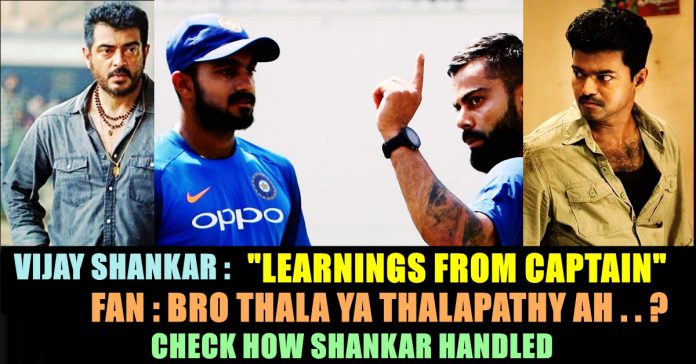 The most easy way to predict or get close to a person in Tamilnadu is by asking him about whose fanatic he is. Cinema is something that is related very close to the people of Tamilnadu where they connect everything to their real life.

Vijay and Ajith are two of the heroes who has very huge fan base in Tamilnadu. Its been a long time since actor Ajithkumar and Vijay declared as official rivals. Only on few occasions both these actors movies released together but on that day the opening of both the movies would be a deadly one.

Though the actors themselves enjoying a healthy friendship between them, verbal spats between their fans has always been a never ending one. Then it took place in movie theatres but now as social media has been an easy accessible one to every smart phone users, it became easy to fight over or prove their favourite star’s fan base. Today cricketer Vijay Shankar who is currently being as a part of Indian cricket team against Australia posted a tweet with his captain Virat Khpli. The picture shows Kohli giving a piece of him mind to his junior and Vijay Shankar seen admiring his captain with an awe in his face.

Though the comment is completely irrelevant to his post, Vijay Shankar politely answered as “Thala – Thalapathy fan :)” which is receiving more than 100 loves from the fans of both the actors.

For the uninitiated, Vijay Shankar is an Indian cricketer who plays for Indian cricket team and Tamil Nadu. He is an all-rounder who bats right-handed and bowls right-arm medium pace. In the Indian Premier League, he played for Chennai Super Kings and Sunrisers Hyderabad.

Though the cricketer answered the question in a calm and composed way, when this question is going to be stopped from asking to every one who is making their first step towards the success? Even actor Vijay Sethupathi stopped one host from asking this vintage question in a recent award show which sums up the structure of that one particular question.

What do you think on Vijay Shankar’s answer and the question asked to him ?? Comment your views below !!