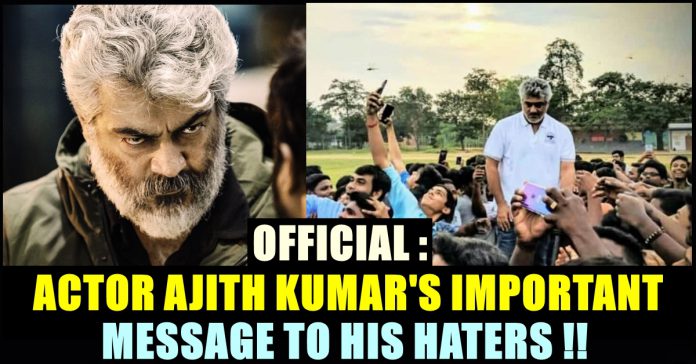 Actor Ajith Kumar’s manager Suresh Chandra who also runs a PR agency named Done Channel, came up with a tweet on the evening of Friday, updating about the statement of the “Valimai” actor on his 30th year in the film industry. Going by the tweet of Suresh Chandra, Ajith Kumar sent a special message to his fans, haters and neutral fans. The actor took reference of a coin to describe how he receives the opinions of all the three of them. He also quoted his favourite saying “Live and Let Live” in his statement.

“Mr Ajith Kumar’s message on his 30th year in the film industry. Fans, Haters & Neutrals are 3 sides of the same coin. I graciously accept the Love from fans, the hate from the haters & the unbiased views of the Neutrals. Live & Let live!” Unconditional Love Always!! Ajith Kumar” Suresh Chandra’s tweet about Ajith’s recent statement read.

Fans, Haters & Neutrals are 3 sides of the same coin. I graciously accept the Love from fans, the hate from the haters & the unbaised views of the Neutrals.
Live & Let live!
Unconditional Love Always!!
Ajith Kumar

Other than acting, Ajith became a race car driver, competing in circuits around India in places such as Mumbai, Chennai and Delhi. He is one among very few Indians to race in the International arena and in Formula championships. He has also been abroad for various races, including Germany and Malaysia. He drove in the 2003 Formula Asia BMW Championships. He raced in the 2010 Formula 2 Championship along with two other Indians, Armaan Ebrahim and Parthiva Sureshwaren. Based on the annual earnings of Indian celebrities, he was included in the Forbes India Celebrity 100 list three times.

In the year 2020, Ajith kumar hailed for mentoring the students from IIT Madras to design a drone that helped the government to spray disinfectants across a large area of land. On the work front, after “Valimai”, the actor is rumoured to be joining with H. Vinoth again who directed him in his previous film “Nerkonda Parvai”.