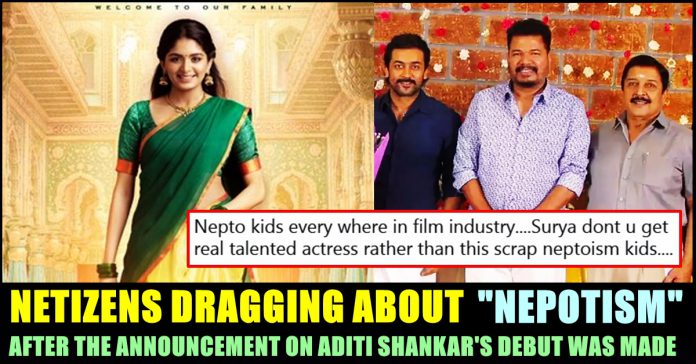 Term “Nepotism” Trending In Internet After The Announcement About Aditi Shankar’s Debut Was Made !!

As soon as the announcement about Aditi Shankar’s debut into Tamil film industry was made, the term “Nepotism” started trending in the micro blogging social media site with reactions questioning the kids of stars making entry into Kollywood easily while many talented youths struggling to get opportunities. Veteran actor Siva kumar’s son Suriya, under his own banner 2D entertainments, announced that prolific filmmaker Shankar’s daughter Aditi Shankar will be making her debut by pairing up with his brother Karthi in the upcoming film “Viruman”. Many celebrities from film industry wished Aditi the best for her upcoming venture.

Director Shankar’s eldest daughter Aishwarya, a doctor, had recently got married to a cricketer named Rohit Damodaran who is known for playing in Tamil nadu premier league. After bankrolling Karthi’s rural blockbuster “Kadaikutty Singham”, the Suriya-Jyothika duo once again came forward to produce “Viruman” which is touted to be a rural drama. It has been reported that Director Yuvan Shankar Raja is going to compose music for the 2 D’s production venture. Yuvan and Karthi combo is known for some of the chartbuster albums such as “Paiyaa”, “Naan Mahaan Alla” etc. The duo is joining hands after 8 long years as the last film they worked together is “Biriyani”.

“Viruman” which is going to be shot in and around of Theni, reportedly going to talk about family and relationships. Raj kiran is expected to play a crucial role with Soori and Prakash Raj supporting the cast of the film. The film is going on floors from Monday with a Pooja win Chennai. Director Shankar, aconforiming about his daughter’s upcoming venture, came up with a tweet writing “Thanks dear
Suriya & Jyothika for launching Aditi Shankar through 2D Entertainments which always delivers quality movies! Thanks to Karthi. I believe cinema lovers will shower her with love as she comes fully prepped to make her debut.” whereas Suriya uploaded a tweet saying “A very warm welcome to Aditi Shankar! You are going to win everyone’s heart! God bless!!”

With many celebrities including directors Arivazhagan, Chimbu Devan wishing Adithi for her debut film, the announcement also garnered trolls and criticisms as a number of netizens started dragging about “Nepotism” into the decision made by 2D Entertainments. “Nepto kids every where in film industry….Surya dont u get real talented actress rather than this scrap neptoism kids….” a twitter user said whereas another one sarcastically wrote “Shankar sir next movie would be on nepotism”

Shankar sir next movie would be on nepotism https://t.co/qtg2Prr1bJ

Nepto kids every where in film industry….Surya dont u get real talented actress rather than this scrap neptoism kids….

Idiyappam Parambarai Vembuli emotionally tweeted his growth from the movie ‘Bahubali:  The Beginning’ to the movie Sarpatta Parambarai. Though he played a very small...