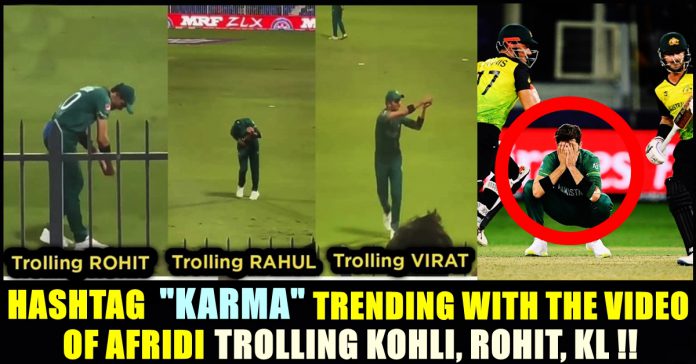 After the defeat of team Pakistan, term “Karma” trended in the micro blogging social media site with the two different videos of Pakistan seamer Shaheen Afridi. A video shows the cricketer allegedly imitating how India’s top order batsmen Rohit Sharma, KL Rahul and Virat Kohli got out in his deliveries to the fans who were present in the stadium. The incident happened during the match of Pakistan against Scotland.

Now, in the match against Australia, Shaheen went for three consecutive sixes in his last three deliveries which made the fans of team India to trend “Karma” in the Twitter platform. Video edits comparing both the incidents are doing rounds with captions trolling the cricketer for the way he mocked the top order batsmen of team India.

Now, a viral video shows Shaheen Afridi of Pakistan mocking Indian top order batsmen by demonstrating how they got out in his delivery. The Pakistan seamer who started the tournament by picking up the wickets of three best batsmen in the world, ended up conceding 3 sixes in the last three deliveries he bowled.

Check out the reactions based on Shaheen’s three sixes that were trending with “Karma” hashtag :

Shaheen Afridi was mocking & mimicking after he took 3fer against India, today he got smashed with 3 Sixes. #Karma pic.twitter.com/QkUyLAJOK2

This afridi was making fun of our batters and now
6,6,6 #karma #Karma pic.twitter.com/yMHcDZWh2y

Former Indian Spinner Amit Mishra won the hearts of Internet users by sending a random online user Rs. 500 after he asked him to...