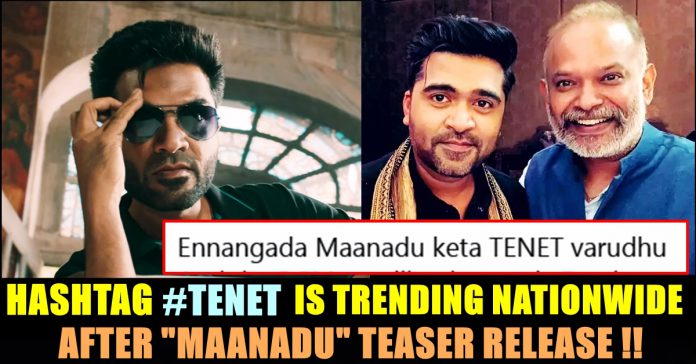 The most awaited teaser of Venkat Prabhu’s upcoming film “Maanadu” released on youtube to celebrate Simbu’s 38th birthday. The film marks the first collaboration of Venkat Prabhu and Simbu as a director and protagonist. Previously, Simbu did guest role in the filmmaker’s third directorial “Goa”.

The teaser of “Maanadu” exhibits a 75 seconds video consisting Simbu, SJ Surya, Kalyani Priyadharshan, Bharathi Raja, S.A Chandrasekhar in reverse version. “Time does not wait for anyone” is what highlighted in the teaser and the plot seems to be revolving around the tale of money and muscle power.

Simbu who plays Abdul Khaliq in the film, looks dapper in his never before seen look and the teaser promises a complete action entertainer. The compilation of a series of reverse shots, triggered fans to predict the story of “Maanadu”. Meanwhile, a number of fans who watched Hollywood filmmaker Christopher Nolan’s recently released “TENET” started comparing Maanadu’s teaser with it.

Hashtag #Tenet was trending in the micro blogging social media site with thousands of tweets. In Tenet, a secret agent is given a single word as his weapon and sent to prevent the onset of World War III. He must travel through time and bend the laws of nature in order to be successful in his mission.

On seeing Simbu doing stunts in reverse action, similar to the protagonists of “tenet”, one of a fan wrote “Tenet trending because of STR and VP!” whereas many others trended funny memes and reactions. However, many fans believed that it is too early to predict the core plot of the film.

Lolol, Tenet trending because of STR and VP!

#Maanadu was actually scheduled to release for 2020 summer..

Maanadu looks like the Indian version of Tenet #tenet #manadu

teaser gv too much vibes of TENET. maybe @vp_offl got inspired from TENET trailer and wrote a script based on the time inversion theme. Anyways looks amazing. hope #manadu be another career best for the man who gv us mankatha 💥🥰 !! https://t.co/cDPD4Nuq4x

Ennangada Maanadu keta TENET varudhu
And the BGM was like the music Foreigners put in their Indian Youtube vlogs lol.

But, Looking forward to it!

#MaanaaduTeaser – Nolans #Tenet concept localized and commercialized. This is a brave brave attempt from @vp_offl . Shot and scene continuations – Team would have pulled their hair to execute each bit of it !! https://t.co/5oZoOfVwyS

Richard Nathan is committed to do the cinematography for the film and Praveen is doing the cuts. The music department is going to be led by Yivan Shankar raja and the film is being produced by Suresh kamatchi.

Comment your views on “Maanadu” being compared with “Tenet” !!

Previous articleSanam Shetty Got Married ?? Check Her Reply To A Follower
Next articleSachin’s Tweet On The Ongoing Agitation Added Fuel To The Fire !!

Actor Dhanush has a very interesting line up ahead of him after his blockbuster film "Asuran". The national award winning actor is currently busy...

Super Singer which was started in 2006 is a reality TV singing competition in the Tamil language. The show is televised in India on...