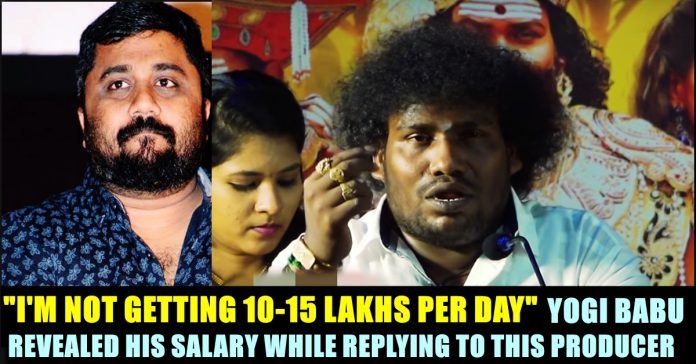 Dharmaprabhu is an upcoming fantasy comedy film written and directed by Muthukumaran. This film is produced by P. Ranganathan under the production banner Sri Vaari Films. Yogi Babu will be in the lead role in this film. Justin Prabhakaran will be composing music for this film. The film editing is done by San Lokesh and Cinematography works done by Mahesh Muthuswamy.

Yesterday the movie’s audio launch took place and many celebrities participated in it. The movie said to be a fantasy comedy, the trailer of it released few days back. In the audio launch, Studio Greens Owner Gnanavel Raja while giving his speech asked Yogi Babu to reveal his actual salary per day to all the producers.

Yogi Babu while answering his question asked the producer to approach him directly instead of believing the rumours. The comedy actor said “”If I had demanded hefty pay from all the producers, I would have been jobless by now. In fact, for many projects, I’ve compromised on my salary to encourage deserving talents. I even did a couple of movies for your company as well. You know how much I got for it. People often say that I’ve easily become a successful comedian as I didn’t have any competition. But I would like to register that I’ve always faced competition. Lot of people have fought similar battles and won in the past, and new comedians might replace me in the future. It’s just a matter of time.”

The first look poster of Dharmaprabhu which was released on 2 November Yogi Babu stands like Yaman with a weapon Gada. Yogi Babu is a Tamil comedy actor, who has appeared in Tamil language films.He rose to fame following his performances in Aandavan Kattalai, Kolamavu Kokila and Pariyerum Perumal, before becoming a regular cast member in Tamil comedy films.

Babu was first spotted by director Siddhaarth Sivasamy, when he accompanied a friend to the shoot of the comedy television series, Lollu Sabha. Intrigued by Babu’s peculiar looks and physique, Ram Bala enquired if Babu wanted to become an actor and subsequently took him on board as a junior artiste. Babu also worked as an assistant director in the series, and helping write scenes for two years.

He made his feature film debut in the Ameer-starrer Yogi as an aspiring actor and subsequently adapted the name of the film as a prefix for his stage name. In 2013, he appeared in his first extended comedy role with Pattathu Yaanai, while he also featured in the Hindi film, Chennai Express alongside Shahrukh Khan.

On the work front Yogi Babu is now busy doing films with many top heroes including Superstar Rajinikanth and Thalapathy Vijay. Apart from them he is expected to be seen in Jeeva’s Gorilla, Vikram’s Kadaaram Kondan and many other movies.

Previous articleThis Fan Posted A False Picture Of Priya Anand ?? Check How The Actress Reacted !!
Next articleKKR Team Deliberately Let Down Dinesh Karthick Due To Ego Clash ?? Check Out !!

To make services top-notch, Indian Railways is equipping its trains and stations with world-class facilities but it's saddening to see the transporter's struggle with...