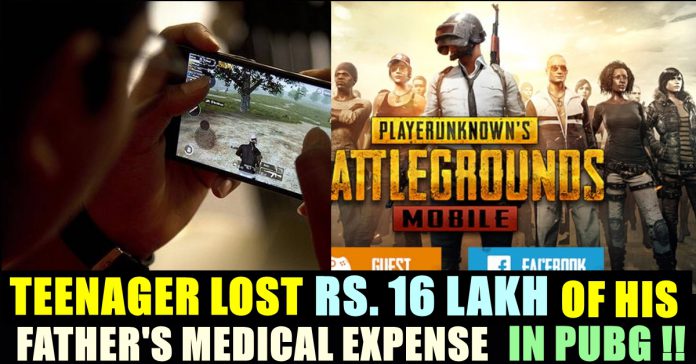 A teenage boy who belongs to Punjab spent his father’s savings of Rs. 16 lakhs in PUB-G game by buying the in-app items including artillery, passes for tournaments and virtual ammunition for over a month’s duration. PUB-G game is the new addiction among the youngsters of India as we can see the app being downloaded by millions of people in the country since past one year.

It has emerged as one of the most popular games in India and perhaps that’s the reason why it is giving sleepless nights to parents, schools, universities, and the young gamers who are addicted to the game. Recently, the massively popular game gained notoriety after cases of addiction were reported to the National Institute of Mental Health and Neuro Sciences. In fact, many schools in our country have begun to warn parents about the ill-effects of playing the game for hours at a stretch.

Now, in this recent case, a 17 year old boy spent his father’s entire medical expense in the mobile game. The Khagar based boy bought mobile from his parents saying that he would use it to study online. But he was using it to play the Player Unknown Battlegrounds Game excessively. Knowing about the fact that his father’s bank account is linked with the smartphone, the boy was using it to play the game luxuriously to an extent he spent Rs.16 lakh from various accounts of his family. The bank details and card details were saved in the phone itself by the parents for later use.

The boy’s father have reported to media that he would make transactions from the mobile and will delete the messages from the bank, because of which the debits remained unknown to them. Parents came to know about the details only after reviewing the bank statements. The father further said that he has ailment and was saving the money for his treatment. The gamer also emptied his mother’s bank account before emptying his own account. He was using all the three accounts to play the game.

To avoid getting suspected from his parents, the boy kept shuffling money from one account to another. “After we received details from the bank, I found that on several occasions, he shuffled amount from one bank to another to avoid nil balance. He was using his mother’s phone for quite sometime and she was not much vigilant to notice this” the father to the media.

Now, to teach his son a right lesson, the father made him work at a scooter shop. “I cannot let him sit idle in the home and cannot give him a mobile phone even for studying. He was working at a scooter repair shop so that he realises how hard it is to earn money. I am hopeless now as the money was saved for my son’ future” the dejected father said. This is not the first time, a family facing tragedy due to this game. Most recently, a Tamil nadu based teenager died of heart attack while playing the game. A report surfaced last year said that a boy killed his father for not letting him to play the game.

Director Bala who is known for providing unconventional films to the fans of Kollywood film industry, legally got separated from his wife Muthu Malar...

“We Found Him Sitting On The Top With His Wife’s Dead Body” Says Rescue Officer !!

As their bus surged forward in the flood waters that still inundated National Highway 47, people standing on top of buildings on either side...