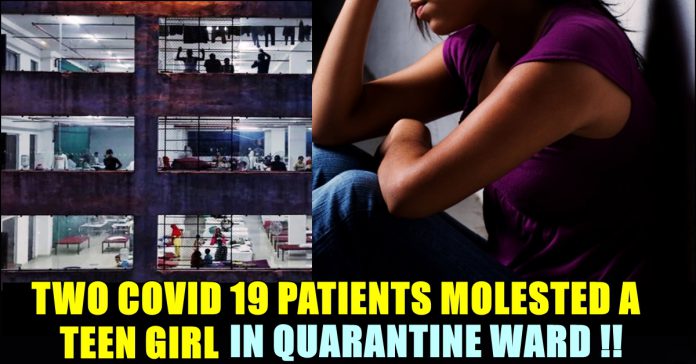 Not many days ago, a report on a man sexually assaulting a 40 year old woman in Navi Mumbai’s quarantine ward surfaced. Now, to our shock, a 14 year old teen girl who is a COVID 19 positive patient was sexually assaulted by two other men who are also COVID 19 patients. The incident happened at The Sardar Vallabhai Patel corona care centre located in South Delhi. It is the biggest quarantine facility in the city.

According to sources, the incident took place around 2 PM on Friday last week inside the city’s largest COVID care centre. The accused men seems to have waited for the victim to come out of the female ward, reports suggests. “When the victim went outside the female ward to the washroom, the boys who were roaming in the corridor molested her. When she started screaming, the accused fled only to get caught by the security guard who alerted the police” officers of police department said. They were arrested five days later after they tested negative for COVID 19.

“An FIR has been registered, and following COVID 19 protocol, the victim has been examined and sent to a private care centre. The accused were investigated on Thursday after they tested negative and have been sent to judicial custody in isolation” said a senior police officer.

The South Delhi police produced the accused before the court on Friday through video conference. The two have been kept off the other inmates in the jail. Meanwhile, the news is spreading like wildfire as actress Nagma who is known among Tamil audience for acting in “Baassha” film reacted to it. “This is what is happening in #Covid wards a 14 year minor sexually assaulted inside Delhi’s biggest quarantine facility” her tweet read.

This is what is happening in #Covid wards a 14 year minor sexually assaulted inside Delhi’s biggest quarantine facility https://t.co/QjEAN8Q8X0

The official sources has reported that the brother of the accused was earlier lodged in the quarantine center where the he used to visit. He met the woman at the centre who was a COVID 19 suspect. He reportedly asked her if she needed him for help. He had developed a sort of intimacy with her by offering help.

By using the advantage of his intimacy with the woman, the 25 year old man visited the woman last evening and raped her. After the result came, it has been identified that the victim has been tested negative and the accused tested positive. “The accused got arrested and he just tested positive today. we are keeping him under guard” said Navi Mumbai police commissioner Sanjay Kumar.

Previous articleAmitabh Bachchan Got Extremely Angry On seeing This Report About Him !!
Next articleWoman Felt “Ugly” After Seeing Sameera’s Posts !! Check How The Actress Replied