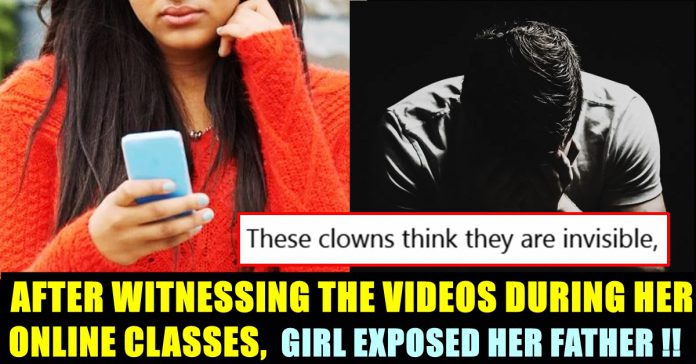 A teen girl, while attending online class through her father’s smart phone, found that her father is involved in an extra marital affair and informed about it to her mother. The incident had made the headlines after the mother wanted her husband to be punished legally. She also wanted to get separated from her husband but the process of convincing her to stay with him is currently underway. The bizarre incident took place in Mandya district of Karnataka.

One day, while she was surfing for some other content on the phone, the girl came across a number of intimate videos of her father with a woman who is alleged to be his lover. The man had recorded the intimate moments of himself with the woman and saved it in his phone. Shocked teen, immediately informed about it to her mother. According to Police, the matter came to light in October when the man gave his phone to his daughter for class 12 online classes.

The mother approached Police and women organisations seeking action against her husband who is said to be a rowdy sheeter, according to reports. The 18 year old relationship between the duo almost came to an end. While the woman demanded a separation from him, The husband wanted to live with his wife and two teenage children. Cops and other voluntary organisations had intervened into the issue and trying to resolve the family dispute.

For recording the intimate moments with a woman, a police case has been filed against the accused. Reports suggests that there isn’t much progress in punishing him legally. If the man is found guilty of recording the videos without his lover’s consent, he will be prosecuted under the provisions of the Information Act 2000.

“We will have to probe whether the accused has shot the video with the consent of the woman and whether he had forwarded them to other devises” Police officials said according to reports. A cognizable report has been registered by the Police, the report adds. The couple has been married for 18 years and their two kids aged 15 and 17.

The incident had grabbed the attention of social media as a result of which various kind of memes and reactions are surfacing based on the case. While a set of people are making fun out of the father who got caught, many expressed their concern over the teen girl who happened to witness such traumatic incident.

I would have posted it every SM platform.

Sadly the girl can never get over that trauma!!!

These clowns think they are invisible,