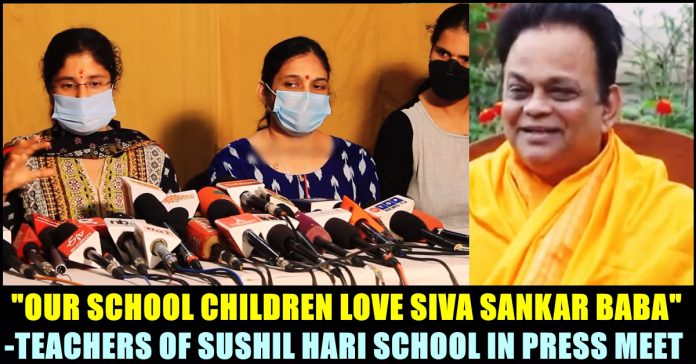 Teachers and administrators of Sushil Hari International school conducted a press meet stating that the accusations made on Siva Sankar Baba are completely false. They invited the press reporters to visit the school once before accusing Siva Sankar Baba of sexually harassing female students and said that they are very much affectionate towards the accused. They also said that he owns no property and lives alone. “The school runs on a trust” they said. When the reporters asked them to tell their opinion on the complaints made by the former and current female children, the teachers said that the accusations are not proved yet and wanted people to wait for the “Truth” to come out.

The Chennai CB-CID Police which is probing allegations against Siva Sankar Baba, founder of Sushil Hari International school, arrested him in Delhi on Wednesday. The 72 year old Siva Sankar was accused of sexually abusing the female students of his school. So far, three FIRs has been filed against him at the Chengalpattu Police station for involving in sexually abusing girls. It has been reported that the accused was admitted in Dehradun in Uttarkhand for a heart operation. He got arrested by Police as soon as getting discharged from the hospital and reached Delhi.

Now, the latest report said that Siva Sankar baba has been admitted to Stanley Government Hospital after complaining about chest pain. His health condition is currently said to be stable, according to reports. On Friday, CB-CID has arrested Sushmitha, an alumnus and a devotee of Siva Sankar baba for convincing students to go to the bungalow of Siva Sankar baba. Meanwhile, teachers and administrators of Sushil Hari International house conducted a press meet brushing off the accusations against Siva Shankar baba.

“If I can hug my child and my father can hug and kiss my child, Sivasankar baba can do it too with affection. he won’t force children or do it without their consent” said one of the teachers of the school. When a reporter asked the teachers to answer on the obscene videos and photos that are doing rounds in social media platforms, a teacher questions back “These are all allegations, right ?”. “Do we have any authentic proof to say that the videos are true ?” another teacher asked.

A class teacher of 11th and 12th standard who is also a subject teacher, says that children would be so excited to see Baba. They also denied Baba identifying himself as “Lord Krishna” and said that he wants everyone to feel the “God” in their inner self.