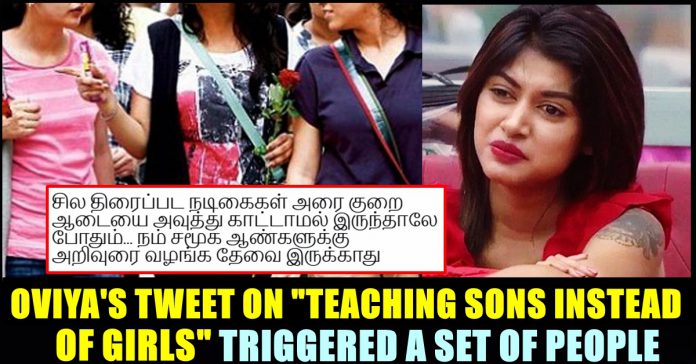 A tweet posted by Oviyaa on teaching the sons about respect and consent instead of teaching daughters about self respect has garnered huge attention from the users of micro blogging social media site. She who is known for gaining a separate fan base only through raising voice on various issues in Bigg Boss house, has also been raising voice for issues that are taking place in the outside world after her Bigg Boss stint.

In the show, the actress attracted the audience through her bold statements and gutsy decisions inside the house. The actress confronted with almost all of her housemates inside the Bigg Boss house, including experienced dance choreographer Gayathri Raghuram and Ganja Karuppu. As she has become a favorite contestant among the audience in Bigg Boss season 1, ‘Oviya’s army’ and ‘Oviyans’ have gone crazy on her. A campaign has been launched on the social media platform at that time to garner votes for the much-loved contestant who has managed to charm viewers with her expressions and way of dealing with the others in the house.

She recently grabbed headlines after criticizing Prime minister Narendra Modi through a meme. Now, she came up with a tweet raising voice against moral policing on girls. “Instead of teaching your daughters self defence and #metoo.. teach your sons about respect and consent” read the recent tweet of Oviyaa.

"Instead of teaching your daughters self defence and #metoo.. teach your sons about respect and consent "

However, the tweet of Oviya offended few people and they started questioning her on whether all the girls are perfect. Few of them who commented on her post agreed with her as well. Check out some of the comments below :

Don't add 'instead'…. it's not like all the boys are bad and all the girls are good….just teach decipline to both of them💁‍♂️

Teach sons about respect and consent.
Teach daughters self defence anyway, so that they can beat the hell out of sons who were not taught well by their parents and protect the girls who don't know self defence.

This is bullshit. Are the girls are perfect??? Teach sons and daughters about all. Even now girls are calling gotha gomma.

Exactly teach ur sons respect and consent.. teach ur daughters cheating and blaming others for their mistakes. Velangidum 🤦‍♂️

Don't add 'instead' it's not like all the boys are bad and all the girls are good….just teach decipline to both of them💁‍♂️.

Teach them equally about culture and morality. Things are going beyond the limits these days.

Does rape and abuse to only one gender?
Better say teach all children how to respect, equal and understanding by their respected parents.

A.R.Rahman, who attended the event day before yesterday, said that “Ilayaraja is my headmaster. I have learnt a lot from him. When I look at...

Praveen Kumar is one of the most important pacer of his time. His performance for team India during his prime time is exceptional and...