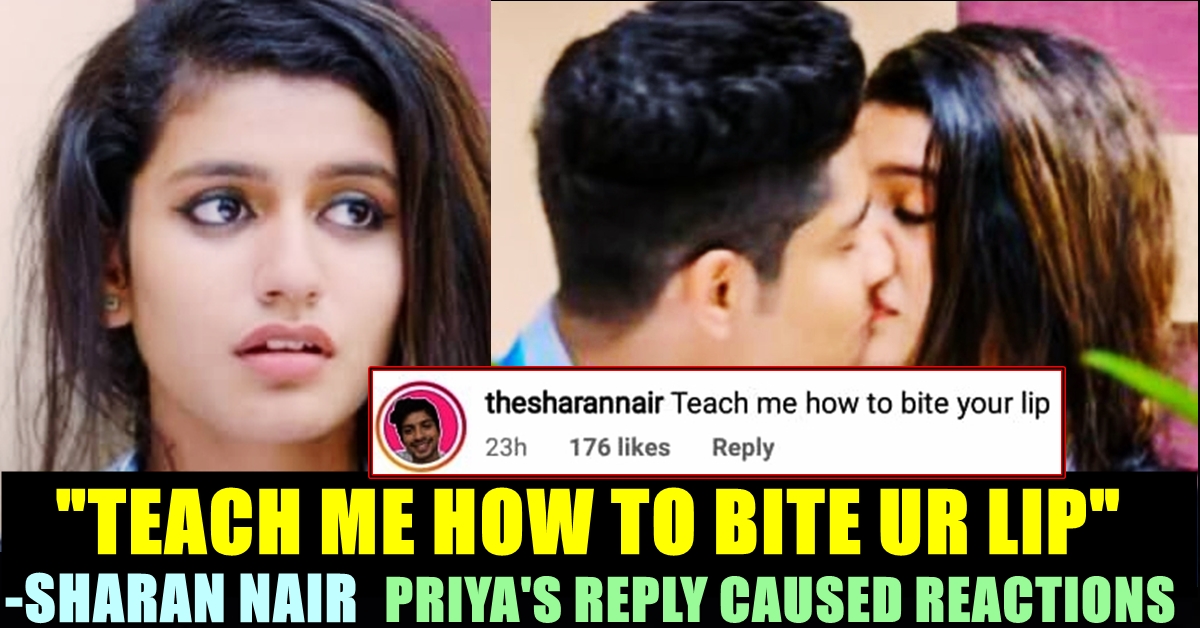 A reply made by wink sensation Priya Prakash Varrier to Sharan Nair grabbed the attention of the Instagram followers of her. The actress recently released a lip syncing video of her in her official Instagram account and Sharan uploaded a comment asking the actress to teach him how to bite her lip. After seeing the reply of Priya, many followers of the 21 year old actress stormed the comment sections with gross replies.

The wink sensation is an active social media user. Currently, she is having nearly 70 lakh followers in the photo posting social media accounts. On Thursday, the actress came up with an Instagram reel, syncing her lip to a popular Hindi song “Manwa Laage” of Shreya Goshal from the from Shah Rukh Khan and Deepika Padukone starrer Happy New Year.

The video went insanely viral among the users of social media platforms and many “wow”ed at the actress’s expressions in the black attire. Watch the video below :

The video garnered 1 lakh plus likes in no time with several kind of reactions saying “Wow”, “great”, “cute” etc. Popular social media personality Sharan nair dropped a comment in her post writing “Teach me how to bite your lip”

Replying to his comment the actress said that she “will” with a tongue out emoji.

Check out the screenshot of his comment and the reply of the actress below :

Many of the actress’s who saw the reply, started posting gross comments in the reply section of the actress. Some of them asked Sharan to learn about it from Roshan Abdul Rahoof who had a kiss scene with the actress in her debut film “Oru Aadaar Love”

On the work front, Varrier will appear in Telugu action-thriller Check alongside Nithiin and Rakul Preet Singh. With this movie, she will be making her Tollywood debut. The film is set to hit the theaters on February 26.