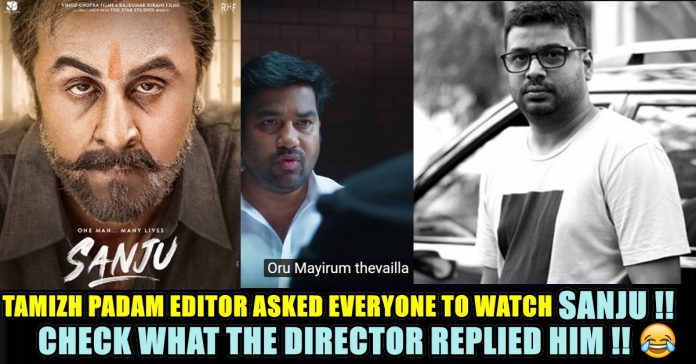 The Sanjay Dutt biopic has been directed by Rajkumar Hirani, whose films like PK and 3 Idiots have emerged as blockbusters at the box office. Even ahead of its release, Sanju created quite a buzz. Every celebrities in the town praised the film including Aamirkhan for its moving screenplay. Tamizh Padam 2’s editor T.S Suresh also took twitter to express towards the film. He said “Everyone! And I mean, literally everyone. Stop doing whatever you’re doing and go watch #Sanju” in his twitter account. Check out his tweet below:

Everyone! And I mean, literally everyone. Stop doing whatever you’re doing and go watch #Sanju.

For this tweet his director C.s Amudhan decided to break his emotion. Check out what he has to say on his editor watching “Sanju”

Everyone & I actually mean only you. Stop watching Sanju & get back to work. #TP2 https://t.co/zFxGomD4lT

He ordered his editor to stop watching other movies and finish the work. Hilarious !! ain’t it ?? What’s you opinion on this ?

Previous articleRio To Feature In Bigg Boss Current Season ?? : Watch Video !!
Next articleKamal Publicly Criticizes The Ruling Government In BIGG BOSS !! : Check Out What People Has To Say !!

Bollywood actress Anushka Sharma who is expecting her first baby, expressed her frustration over a photographer who breached her privacy. Virat Kohli, her husband...

"Only time will tell" is one phrase that never gets old in Rajinikanth's press briefings. The actor-turned-neta has been playing with this one liner...