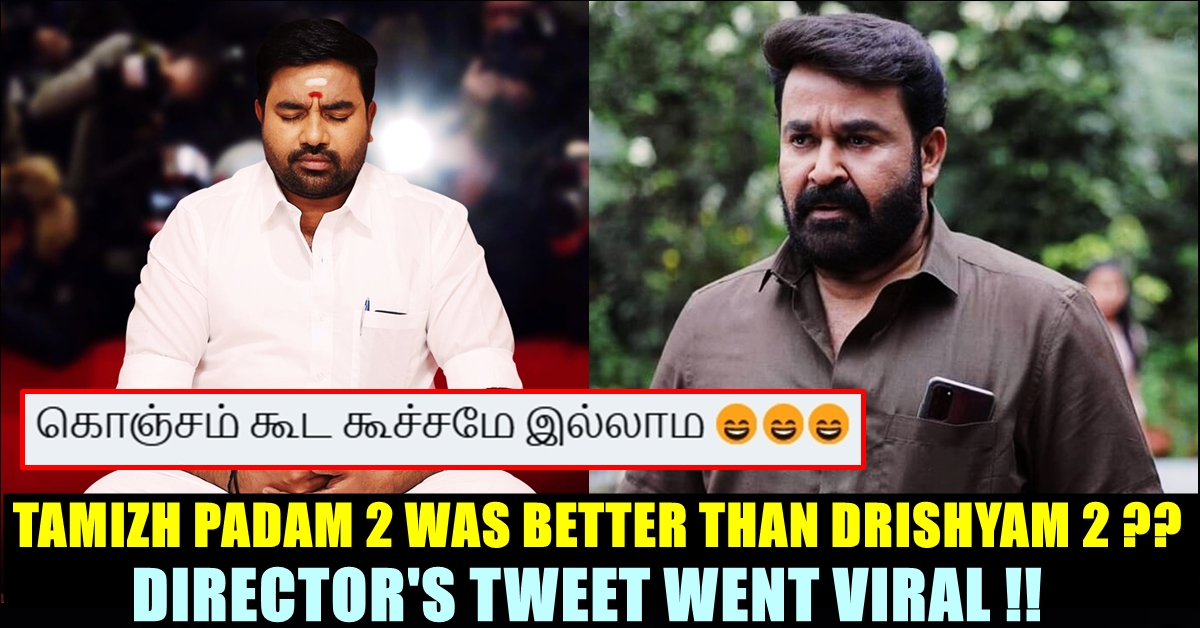 Tamil filmmaker C.S Amudhan posted a tweet indirectly denoting that the sequel he made for “Tamizh Padam” is better than the sequel of the recently released Mohan Lal starring mystery thriller Drishyam. The director who is known for his sarcastic tweets with witty one liners, received 9K likes from the users of the micro blogging social media site for his humour sense. He also became a subject to severe trolling for the tweet he posted on Saturday.

Along with the fans, many celebrities from the film industry are also appreciating the filmmaker and Mohan lal for the way they made the film. “Overwhelmed and overjoyed by the tremendous response to #Drishyam2. I Am touched by the fact that so many of you have already watched the film and have messaged or called with words of appreciation.” wrote Mohan lal in his official twitter account to express his happiness.

Overwhelmed and overjoyed by the tremendous response to #Drishyam2. I Am touched by the fact that so many of you have already watched the film and have messaged or called with words of appreciation.

The actor also said that cinema lovers across the country will support a film for its content and thanked Prime video for enabling people across the world to watch and enjoy Drishyam 2.

The success of #Drishyam2 is a testament to the fact that cinema lovers across the world always appreciate good work and support it.

It is the love and support of the cinema loving public that continues to inspire us to constantly better ourselves.
2/3

My sincere thanks to all for the outpouring of love. It means a lot to all of us on team Drishyam. To the entire team, my congratulations and grateful thanks.

Meanwhile Tamil filmmaker C.S Amudhan who is known for directing the only Tamil parody full length feature film and its sequel, came up with a tweet saying that the film blew his mind and added that Drishyam is the second best sequel ever made.

“Drishyam2 blew my mind. It’s the second best sequel ever made.” read his tweet.

Drishyam2 blew my mind. It’s the second best sequel ever made.

It is very much evident that Amudhan is indirectly making a statement about the sequel he made in a sarcastic manner and the fans are not the ones who wouldn’t get it. “நீ இங்க எல்லாம் நல்லாத்தான் காமெடி பண்ற மேன்.. படம் எடுத்தா மட்டும் மொக்கை போட்டு சாவடிக்கற” wrote a follower to troll Amudhan whereas many others asked Amudhan to give an update for Tamizh Padam 3.

Drishyam 2 and chennai 28 2 on left and tamil padam 2 on right pic.twitter.com/ub05Aav0yE