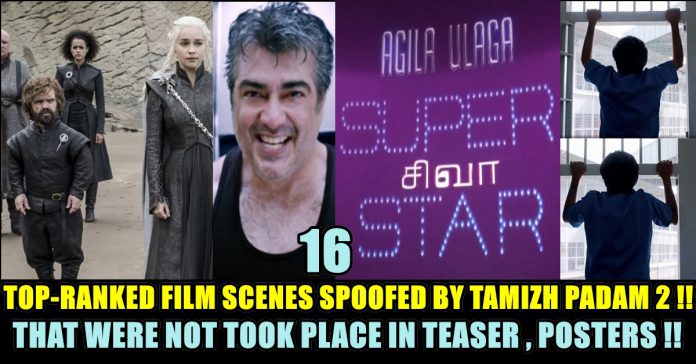 The trailer and teasers suggest that this time, the film has not spared politicians either. From films of Superstar Rajinikanth to Sivakarthikeyan’s Remo, the film takes a dig at everything that’s popular in Tamil Nadu.
[wp_ad_camp_1]

Here’s 16 top ranked highly recognized films that are spoofed by Tamizh Padam 2. These scenes are not took place in teaser posters. This Jump of Simbu in “Osanna” song was spoofed and it is an absolute laughter to see Siva doing it. In the Same way Surya approaching the airport officer in “Varanam Aayiram” , Shiva reasons that he is visiting America to meet his girl friend. And the best part is , he wears this exact T-shirt to resemble Surya. This highly recognized IMDB’s top ranked movie Forrest Gump’s this scene was spoofed by Tamizh Padam 2. Shiva will be seen repeatedly saying “Life is a box chocolates” in this scene which is an epic dialogue in the original movie uttered by the Veteran Hollywood actor “Tom Hanks”. Yes. Indeed shocking. This look of Akshay kumar from the non-released most awaited , high-profile film was spoofed in Tamizh Padam 2. This classic climax scene from the cult classic film “Devar Magan” was spoofed in tamizh Padam 2. This scene of Rajini-Kamal combination from 16- Vayathinile also spoofed in the movie. This transformation scene of becoming evil from good in the movie “Vedhalam” which was widely loved by the fans was recreated by Shiva and it is the place where you will die of Laughing. Yes. This epic silhouette shot from the “Bahubali” movie was used in Tamizh Padam 2 in a very important place.  And they used it well. This proposal scene from “Vettaiyadu Vilayadu” where Kamal will propose Kamalini Mukharjee at the first sight also took place in Tamizh Padam 2. Yes. They haven’t left this fantasy-drama television series “Game of Thrones” as well. They picked up two particular characters from the series in order to recreate their appearance. Check yourself whom they are if you are too curious. This Kabali intro was also recreated by Shiva in a scene where he gets released from jail. The character of “Chitti Robot” and this scene of Chitti finding Vaseegaran by touching the metal body of Robots  was also took place in the film. The role of Rithvika Singh in Iruthi Chutru and her tight hug to her coach Madhavan in the climax was hilariously trolled in this parody film. The main element of Director Pa. Ranjith’s Madras film is this wall. It was hilariously trolled and imitated in this Tamizh Padam 2 as well. This dialog from Vijay’s Pokkiri also used in Tamizh Padam 2. They didn’t showed any mercy to this either. This scene from “Remo” was thrashed by Tamizh Padam where they portray Santhana Bharathy disguises himself as nurse and it mocked the original by showing the heroine being so dumb that she cannot identify Santhana Bharathy even he has face full of beard and mushtache.

These are not even half of what they got in the film , Except these film spoofs they also trolled so many of the political moments that happened in the past few  years.

Previous articleOMG !! Check What This Traffic Police Doing To Reduce Accidents !! Awestruck !!
Next articleForget Films , Here Are The Political Moments That Got Thrashed By Tamizh Padam !! Just Hilarious !!

From Wikki-Nayanthara To Ashwin-Prithi, Here’s How Celebrities Celebrating Their Valentines Day !!

On the day which marks the special occasion for Valentines, celebrities from various industries including sports and cinema are decorating their social media handles...

Television reality show Bigg Boss Tamil seems to be back with the second season. While there have been numerous speculation on the contestants in the...