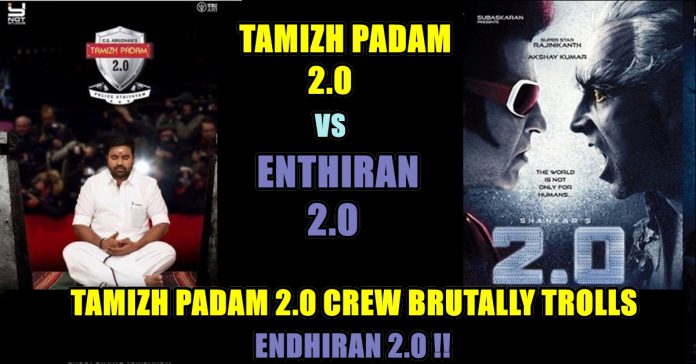 If you thought their dig at the infamous movie pirates Tamil Rockers in their first poster was hilarious, the team have just raised the bar with their second look poster. The resemblance is unmistakable. Shiva looks exactly like Deputy Chief Minister OPS did, when he meditated at the Jayalalithaa memorial just before setting off an unprecedented rebellion in the ruling AIADMK. The second look poster has got people all over social media ROFLing, with the tweet by makers Y Not Studios getting over 500 retweets and over 1,500 likes within the first four hours. The film reportedly stars stars Aishwarya Menon, Disha Pandey, Sathish, Santhana Bharathi, Manobala, R Sundarrajan, Nizhalgal Ravi and Chethan.

The team’s first look poster set Twitter aflutter when it announced that Tamizh Padam 2.0 will release on May 25, 2018, and that there will be a ‘Tamil Rockers release’ the very next day. Poking fun at the heartburn the online pirates cause the industry by releasing all latest movies within days of their theatrical release, the first look poster called Tamil Rockers the film’s “official piracy partner”. Now today, the film’s director C.s Amuthan announced through tweet that Director Venkat Prabhu will announce the reason behind the delay of the film’s release by tweeting “I am extremely honoured to announce that @vp_offl will release the First Look of The Press Release Regarding Delay of Tamizh Padam 2.0 Release at 5pm today.”

As of he said Venkat Prabhu released the Press release only to make the audience go ROFL. They indirectly mocked the press release of Rajinikanth’s high budget Science Fiction movie Enthiran 2.0. This is very much evident when Venkat Prabhu added “This is not intended to resemble anyone” which clearly denotes that they are resembling someone who done it before. The structure and context of the press release of both Tamizh Padam 2.0 and Endhiran 2.0 are extremely similar where Tamizh Padam 2.0 reasoned the real cause behind the delay.

The similar press release note released by Lyca Productions , the production company of Endhiran 2.0 in 2017 , December:

As the film crew’s main motive is to expose the blunt movies and the scenes of Tamil cinema, Now they are seen involving in exposing the blunt moves of Tamil cinema’s promotions as well. On seeing the fans who lament while coming out of theatre after watching a Tamil movie for their money has been wasted, they indeed need a series of Tamil Padam which consoles them.