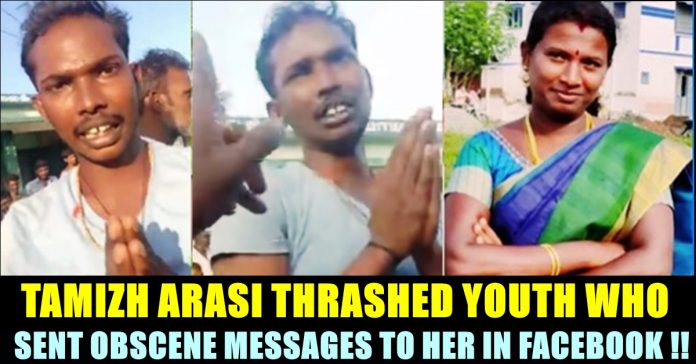 Video of a woman thrashing youth who sent obscene pictures to her in Facebook is going viral in social media platforms. He who belongs to Theni district, harassed women through Facebook messenger and got thrashed by public after one of the women exposed him. She chatted with him in Facebook and made him reach a public place before giving him a severe beating along with public.

Named as Raja, the miscreant kept sending requests to women in Facebook. To those women who didn’t accept his request, he reportedly sent obscene messages and pictures in their messenger. Lately, he harassed a woman in Dindigul. She complained about him to her friend Tamizh Arasi who resides in Theni. “A boy from your locality is disturbing me in Facebook” she reportedly said to Tamizh Arasi to make him stop sending messages.

To warn him ,Tamizh Arasi texted him in messanger and asked where he lives. On seeing the messages from her, Raja started sending obscene texts to Tamizh Arasi as well. Without losing her nerves, Tamizh Arasi pretended like she is interested in him and asked him to meet her in person.

Raja rushed her to reach an address in Uppukottai and Tamizharasi reached the location with her husband and child. As soon as witnessing Raja in person, Tamizharasi started beating him. She also grabbed his bike key, cell phone and asked him to bring his parents, says reports. Knowing about his behaviour, people who were present there also started beating him.

At on point, Raja fell on the feet of Tamizharasi and pleaded her to forgive him by swearing that he won’t misbehave with women for the rest of his life. She who shooed him away, is planning to register police complaint, says the report of Polimer. Police have announced that appropriate actions will be taken against such culprits if the victims come forward to make a formal complaint.

Previous article“I Realized Academic Degree Has Nothing To Do With Knowledge” – Sivakarthikeyan Regrets !!
Next articleBigg Boss Contestant Slammed Kamal & His “House Of Khaddar” !!

Hindu priests who are appointment at the most famous Thiruchendhur Murugan Kovil has been caught scamming the devotees by receiving Rs. 1000 per head...