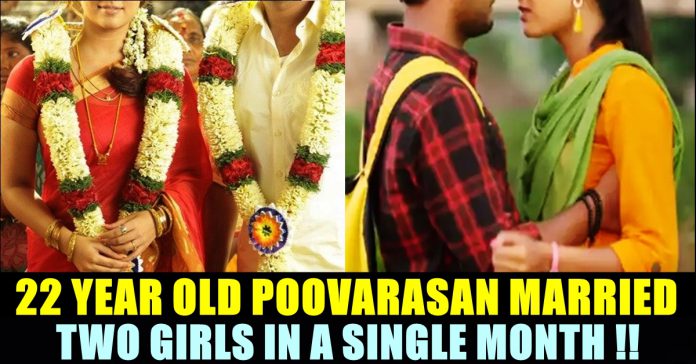 A 22 year old youth from Tamil nadu married two girls in a month and got arrested by the police after his first wife made a formal complaint against him. The news came to light after she picked up a call from his lover with whom he had a romantic relationship during his college days.

The couple, often involved in physical relationship with the absence of their parents which made Narmatha pregnant. After realizing the physical transformation in her body, Narmatha asked Poovarasan to marry her before things getting out of hand. She reportedly hid her health state from her parents even after vomiting several times.

In the meantime, Narmatha kept forcing Poovarasan to marry her who didn’t respond properly. At one point, Poovarasan got absconded without knowing how to handle the situation. This decision of Poovarasan made Narmatha to attempt suicide. However, she was rescued by her parents. When they asked what made her to make the decision, Narmatha disclosed about everything that happened between herself and Poovarasan.

Shocked parents, registered a police complaint against Poovarasan in Kallakurichi All India women police station. After filing the case, Police started searching for Poovarasan. On knowing about the Police complaint against him, Poovarasan surrendered himself on 25th of September. Police officers warned him that he will be spending time in prison for impregnating Narmatha after sexually assaulting her.

When Deepika phone called Poovarasan, Narmatha picked it up which led to a heated argument between them. Deepika reportedly asked Narmatha how could she marry Poovarasan when he was involved in a relationship with her.

After that, Deepika called Poovarasan and asked him to marry her immediately. Poovarasan left the home immediately and married Deepika in the same month. He started living with her in Siruvangoor of Kallakurichi. Narmatha went there with her parents and found Poovarasan and Deepika.

One more complaint was registered in Kallakurichi’s all India women police station against Poovarasan. Officials at police station, called Deepika’s parents and informed about the situation. Shocked parents came to the station and left with their daughter. For marrying two women in a single month, Police officers locked up Poovarasan in jail. The incident created a furore in the locality of Kallakurichi.

Previous articleVanitha Replied To The Haters Who Trolled Her For Reviewing BIGG BOSS 4 !!
Next articleCSK Fans Got Dejected On Seeing The Top Order Collapse !!

Recently, an advertisement which was released by Pakistan’s Jazz TV, created a lot of hype on social media. Mocking Wing Commander Abhinandan, the ad shows...

Miller Tried To Do Stumping !! Faf Du Plesis Calls Him As “MSD” !! WATCH

Part-time wicket-keeper David Miller was praised by his captain Faf du Plessis as "MSD" for his brilliant stumping attempt during the second ODI of...