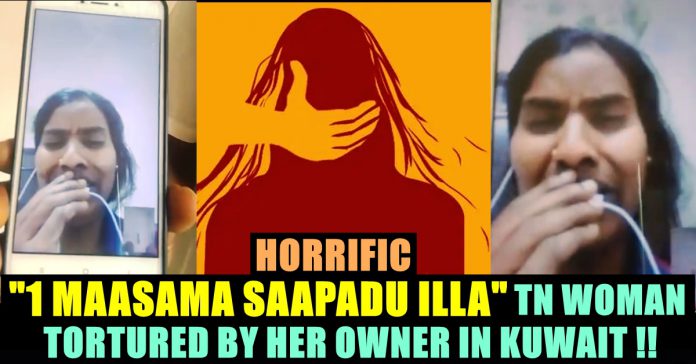 Not many days ago, news of a female assistant professor being tortured by her colleagues in Tagore Medical college surfaced. Now to our shock another video of a Tamil speaking woman being tortured in a same way doing rounds in social media.

The video shows a man asking Krishnaveni to speak up by making her aware of her voice being recorded. The woman who is located in an isolated atmosphere starts telling about the mental trauma she is going through.

Through the caption of the post which was shared in facebook, we can see that the woman is in Kuwait. “This poor lady went for work in Kuwait. She had been tortured mentally and physically by her owner.They had taken her mobile and isolated her without providing any food. Some how she managed to convey this message through someone’s mobile. Now she needs help hence please forward this video to as many as you can till it reaches the officials. (Pls ear it with headphone)” the caption read.

“They are afraid of getting caught and not giving me my phone to me” says Krishnaveni who is close to tears. “They locked me in a room and no food has been provided for me for past 1 month. I couldn’t even stand now and they are forcing me to work for tomorrow. They took my picture and sent it to someone. I even begged them to leave me but they are forcing me to work. Please save me. They haven’t treated me with an injection for my fix” she says in the video.

Ever since "Narappa" of Venkatesh released on Amazon Prime, fans of actors Dhanush and Venkatesh are involved in online verbal spat. They are trying...