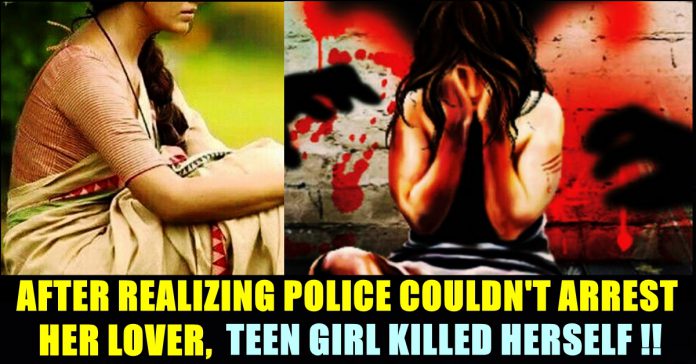 A 17 year old girl committed suicide by consuming poison after knowing that law won’t punish her lover who impregnated her on the promise of marriage. She ended her life on Wednesday near Manapparai. The Police have reported that the girl and the 22 year old boy were involved in a love relationship and had sexual relations. After she became pregnant fro six months, the girl lodged a complaint against the boy with the all women police station on May 25. She accused him for cheating her by refuting his promise.

The girl lived with her parents in Kavarapatti village near Manapparai. Named as Ramki, the accused belong to Baharanpatti village of Pudukottai district. They both who are relatives, were involved in a relationship for over a year, reports suggests.

He who sexually assaulted her multiple times when she was alone at home, made her pregnant after promising to marry her. After she got pregnant, he tried to cut contacts with the girl it seems. Unable to contact him, the girl revealed about everything to her parents who registered a police complaint against him. Under Sections of Protection of Children from sexual offences act on May 29, Police registered case against the accused.

However, Police couldn’t arrest him as he got absconded since the complaint registered. To get him arrested immediately, the victim brought the issue to the notice of higher officials but no effective action made against the culprit result of which the teen girl protested in front of the All women police station demanding the arrest of her lover on Monday.

Later, authorities discovered that the boy obtained an anticipatory bail to avoid the arrest. Anticipatory bail is a direction to release a person on bail, issued even before the person is arrested. It is only issued by the Sessions Court and High Court. On knowing about the information, the girl who realized that the boy couldn’t be arrested, consumed an insecticide kept at her house to kill herself. Her parents who rushed to the government headquarters hospital, got informed that their daughter was declared dead. The girl’s unborn baby also died with her, says reports.

IG Jayaram who said that the girl was stressed over the refusal of the accused to marry her, told the reporters that the girl’s mother had lodged a complaint with the police to take action against the boy who she held responsible for the suicide. He along with DIG Z Annie Vijaya and SP Zia Ul Haq visited the All Women Police station in Manapparai. “DSP of Manapparai will look into the case” IG added. The latest report has said that the boy was arrested for abetment of the girl’s suicide.

Previous articleYouth Married Both His Girl friend & Bride Chosen By His Parents !!
Next article“Prabhu Deva Master Disappointed Us” – Robert Choreographer

Director Naveen of "Moodar Koodam" fame exposed actor Sathish over the Dharsha Gupta issue. The filmmaker pointed out the tweet made by Dharsha after...

Mia Khalifa Announced That She Got Engaged !! You Must See These Reactions !!

The extremely famous and stunning adult star Mia Khalifa has broken the hearts of millions of her fans by recently getting engaged. Mia got...