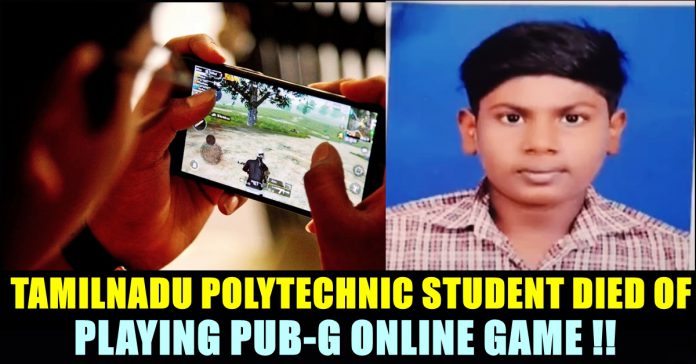 In Erode district of Tamilnadu, a 16 year old young boy died while playing PUB-G game in his mobile phone. It is reported that the teen had a shock and died of heart attack while playing the game. Named as K Sathish Kumar, the deceased lives in Kamala Nagar of Karungalpalayam in Erode. He was a second year student in a private polytechnic college in Kumarapalayam. The teen was pursuing textile designing. Due to the nationwide lockdown due to the corona crisis, Sathish was spending his quarantine time with his friends in online.

Around 5 : 30 PM of Tuesday evening, Kumar reportedly swooned and fell on the floor while playing the online game PUB-G (Player Unknown Battle Ground). Panicked parents rushed him to a private hospital. Unfortunately, he was died on spot as Doctors who examined him confirmed that he was brought dead. Dejected parents, admitted the deceased in Government District headquarters hospital for post mortem.

PUB-G game is the new addiction among the youngsters of India as we can see the app being downloaded by millions of people in the country since past one year. This is not the first time this game caused a tragedy in the country. Not many days ago, a youth in Karnataka killed his father who objected him playing the game. Named as Raghuveer Kumbar, the 25-year-old killed his father Shankrappa Kummar (65). Playing the game led to constant fights between them as Raghuveer is an PUBG addict.

One night, there was another heated argument took place between father and son. Irritated son, went out and threw stones at the windows of the neighbours. The neighbours called the police who took Raghuveer and his father to the Kakati police station. Shankrappa told the police that his son was addicted to games such as PUBG and Final Combat. The police officer let them go after counselling the youth for nearly an hour.

Despite the counselling, Raghuveer continued to play the game after reaching home. Shankrappa again shouted at him and told him to go to sleep. To get rid of his father who restricts him from playing the game, Raghuveer woke up at 5 a.m. and attacked his father in his sleep, after locking his mother’s room from outside. The victim’s cries awakened the mother who raised an alarm. A neighbour woke up and called the police. By the time the police arrived, an enraged Raghuveer killed his father and cut off his head and legs so that he could play the online game PUBG on his mobile phone in ‘peace’.

PUBG has emerged as one of the most popular games in India and perhaps that’s the reason why it is giving sleepless nights to parents, schools, universities, and the young gamers who are addicted to the game. Recently, the massively popular game gained notoriety after cases of addiction were reported to the National Institute of Mental Health and Neuro Sciences. In fact, many schools in our country have begun to warn parents about the ill-effects of playing the game for hours at a stretch.