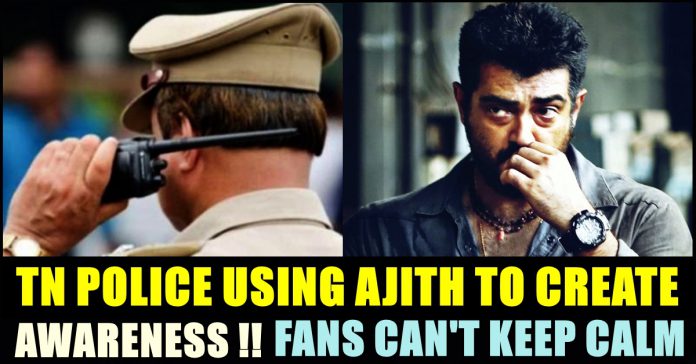 Not only common people, even people from his own industry also admires him for his works and personal characters. Actors like Simbu, Anirudh, Nazriya are few of the many actors who admires Ajith Kumar as their idol. Now to our surprise, twitter handles of Tamilnadu police departments has used pictures and videos from the actor’s movies in order to create awareness.

The official twitter handle of Theni district police has posted a sequence from his recent blockbuster film Viswasam to create awareness. The tweet which is now going extremely viral is being celebrated by the fans of the actor. The meme was created in a way of making awareness to the “Kavalan” app which is specially made for women safety.

Apart from this, the twitter handle of Thoothukudi district police also used videos from the actor’s movies to create awareness. Check out the posts below :

This is indeed a strategy to be welcomed as social media platforms such as Twitter, Facebook, Instagram are filled with the fans of actors. They who are getting involved in trending disgusting hashtags every now and then, can be now used to create awareness in serious issues of the society.

Check out some of the reactions from Ajith fans below :

Comment your views on this strategy of Tamilnadu police !!

Since the Coronavirus outbreak, Health Minister Vijayakumar has been very much active in field as well as in Twitter. He who was busy visiting...