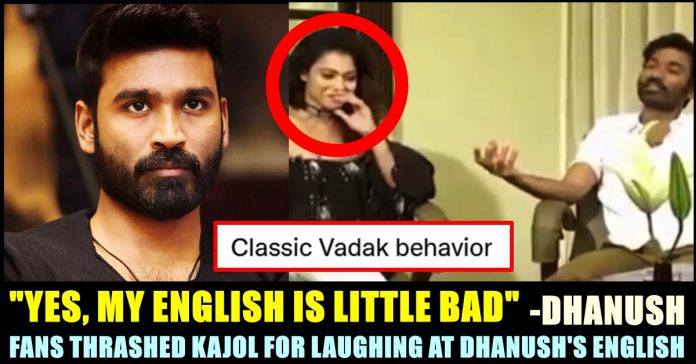 Not many days ago, a video clip from a Hindi web series named “Little things” did rounds in social media platforms, receiving backlash from the users of it for making fun of the looks of Tamil nadu based actor Dhanush. Now, an old video of Bollywood actress Kajol giggling while Dhanush trying to speak in English got resurfaced in Twitter with reactions slamming the senior actress for her gesture. towards the “Padikathavan” actor.

Dhanush debuted to Tamil film industry through “Thulluvatho Ilamai” which was directed by his brother Selvaraghavan. The film was released in the year 2002 and he was criticized for his “lean” look at the time. He went on to act in some of the other films of his brother such as “Kaadhal Kondein”, “Pudhupettai” and “Mayakkam Enna” nurtured himself as a performer. Today, Dhanush is one of the most wanted versatile actors of Kollywood film industry. National award winning filmmaker Vetri Maaran played a huge part in the growth of Dhanush, with whom the latter collaborated in four movies as an actor so far.

He who enjoys a huge fan base in Tamil nadu, went on to make his debut in Bollywood through “Raanjhanaa” and became a pan Indian actor by sharing screen space with Amitabh Bhachchan in “Shamitabh”. Dhanush who also worked in an International project, is going to be appeared in “Grey Man” with Hollywood actors Ryan Gosling and Chris Evans. “Avengers” fame Russo Brothers are directing the “Netflix” project.

The actor collaborated with actress Kajol who predominantly appears in Hindi films, in the sequel of his blockbuster film “Vela illaa Pattathari”. In a promotional event that took place for the film during its release time, Kajol who played antagonist in the film, Dhanush and “Velai Illaa Pattathari 2” director Soundarya Rajinikanth participated to talk about the film.

In the particular video which is currently doing rounds, Dhanush, receives help from Soundarya while interacting with the host of the show in English languahe. Kajol who was present in the hall, could be seen giggling at the actor. Reacting to her, Dhanush says “My English is little bad, I know” in a humorous manner. Though the actor took it in a lighter note, fans of him couldn’t.

Many found that the Kajol’s gesture demeans Dhanush and his ability of speaking a language. Check out some of the reactions below :

why the fuck she gotta laugh for him not stumbling upon the word “ideologies”? It’s such a normal and human thing to do. even whites who’s native is english struggle with this at times.. the fuck?! https://t.co/S8u4t7GTO8

Don’t want to be a racist and all… But effing vadakkans… https://t.co/SslNRTq0cu

Also Read : “You Look Like Dhanush” – Makers Of This Hindi Series Mocked The Looks Of Dhanush !! Check Reactions

Previous articleSelvaraghavan Regrets For Lying About His Film’s Budget !!
Next articleMohan G Advised Selvaraghavan After Seeing His Tweet On “AO” Budget !!

“Premam” Director Alphonse Puthren To Direct Rajinikanth In His Next ??

After making a final decision about his political stint, Superstar Rajinikanth is expected to act in more films after "Annaththe". Earlier, it was rumoured...