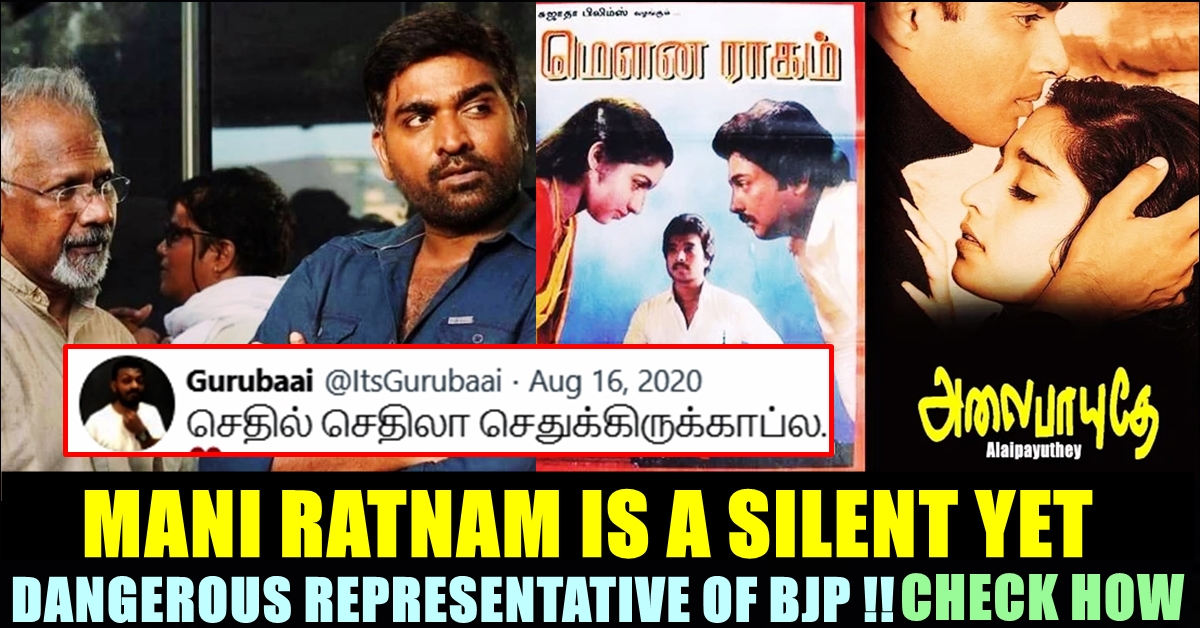 After reading a detailed article written by Rajesh Rajamani on the portrayal of director Mani Ratnam’s Right Wing, Hyper nationalist Politics in his films, the majority number of Tamil speaking twitter users concluded that he is a silent supporter of BJP party. The article was published in Huffington Post and is being widely shared in social media platforms.

Director Mani Ratnam is known as one of the most prolific filmmakers of tamil cinema with aesthetic camera work and strong character arcs. However, Rajesh believes that beneath the beautiful visuals and soulful music, there lies a dangerous right wing Hindu, hyper-nationalist politics. He argues that Mani ratnam has been involved in upholding his ideology since his 1986 film “Mouna Ragam” in which we can see the protagonist (played by Karthick) beating up a rich brat who is supposedly the son of Tamilmani, a member of parliament and a prominent Dravidian party.

Rajesh showed a video that was captured during Roja times where we can see Mani ratnam himself accepting that he made the film (Roja) after getting influenced by a scene in Balachander’s Aboorva Ragangal where Kamal Haasan would beat up a man for chewing gum when National Anthem was being played. Rajesh compared it with people being forced to stand up in theatre when national anthem is played. He anecdoted an incident where a disability activist who was using wheelchair for four years getting assaulted for not standing up in theatre when the National anthem was played. He called Mani ratnam who made Roja and those who judged people’s patriotism in theatre hall as hyper-nationalist.

The scene Mani Ratnam referring in the above video was from “Aboorva Ragangal” which is available at youtube exactly at 18 : 37. The author further depicted how Mani Ratnam tarnished Dr. Kalaignar’s image in “Iruvar” and diluted the character of real life revolutionist “George Reddy” in Ayutha Ezhuthu with his “Michael Vasanth”. He also believed that Mani Ratnam stereotyped Dravidian leaders as corrupts in his movies. The characterisation of Bharathi Raja in “Aayudha Ezhuthu” as DMK’s first chief minister CN Anna Durai is one of the examples Rajesh gave.

Rajesh said that Mani Ratnam presented the Hindu Muslim binary in “Bombay” through the eyes of the Hindu majority and only schooled Muslim community to secularise from their religion. He further depicted how Mari ratnam carefully indulged in inserting his Hindutva ideology in his every film including Nayagan and Ravanan.

Rajesh compared Mani ratnam with German filmmaker Leni Reifantahl who made beautiful films only to further the Nazi propaganda. However, he says Mani ratnam prefers much subtler approach unlike them, peddling a softer form of Hindutva. As soon as reading the article, Tamil twitter users made similar statements against the filmmaker. Check out some of them below :

Unlike Pa Ranjith movies, no one talks about the caste or class politics in Mani Ratnam movies. Wish more people talk about the politics in his movies than the aesthetic filmmaking. https://t.co/EYiIBC4G21

woww. This article is well researched, well written and ripped off the so called legend Mani rathnam. Hidden agendas, soft hindutuva, and many…. "The worst thing about Mani movies are how beautiful it looks". #MustRead https://t.co/AXlCLtyyW4

Miga periya furniture this 👇
It's an undeniable fact that his films are largely from an UC PoV as understandably he draws inspiration only from his own life, I still think his politics is well intentioned albeit superficial

Manirathnam is problematic because he is known for normalizing arseholery and his film Bombay preaches Muslims but he has no qualms with the Tamil Brahmin communities and a lot more. Roja is a reflection of view as Kashmiri Muslims are extremists that to in the times of exodus.

Comment your views on the accusations against the filmmaker !!

This Tamil Film Grabbed The First Place In IMDB & The Young Director Couldn’t Resist Sharing It !!
“If You Want His Call Sheet, Ask Him Directly” Fan Criticized !! Check This Director’s Reply