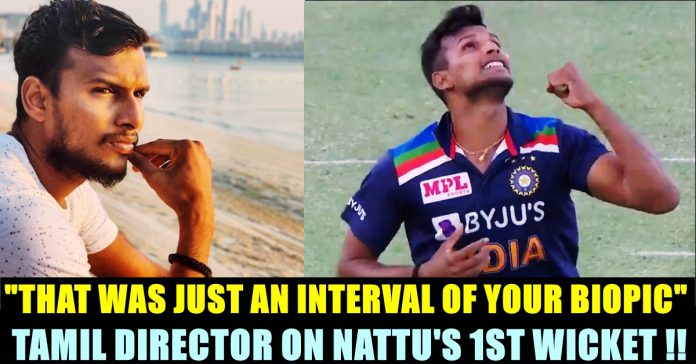 Tamil nadu lad Natarajan made his One day international debut on Wednesday in the third match between Australia and India. He received his ODI cap from his captain Kohli and became one of the very few players from Tamil nadu to represent India. He also became 232nd player to represent team India.

First non-brahmin cricketer from TN to play for India right? Hope tamilnadu cricket and it's cricketer grow on their talent #Nattu a dream ❤️ pic.twitter.com/zq0A3M5iBS

The left hander who had an impressive IPL season in UAE for Sunrisers Hyderabad, made his name take place in the ODI squad. In the third ODI, he replaced Navdeep Saini who went expensive in the first two one day internationals. Natarajan bowled the highest number of yorkers in the IPL tournament and was appreciated by the fans and experts for his unique skills.

Former Indian captain Kapil Dev said that Nattu was the one whom he would call as “Hero” among the players who played the IPL tournament. After winning the toss, India decided to bat and posted 302 runs on the board with the help of Hardik Pandya, Ravindra Jadeja and Virat Kohli. Defending the decent total, Nattu came in bowl the second over for India, his first time in International cricket.

The very third ball he bowled went for a maximum. However, Nattu picked his first ever International wicket in the sixth over of the match. The man of Salem got the wicket of Australian opener Marnus Labuschange. He who tried to hit the ball towards the off side, got inside edge and the bails were off. The Chinnappampatti express looked up at the heavens and pumped his fists. This was the first time India took a wicket in powerplay overs since very long time.

Watch the wicket below :

As soon as Nattu opened his account in ODI, Tamil twitter couldn’t keep calm. Along with fans, tamil cinema celebrities started celebrating the 29 year old. Tamil film director C.S Amudhan said that it is just the interval scene in his Biographical picture that is going to be made in Kollywood.

“that was just the interval-block of your biopic!” his tweet read. Check out some of the reactions below :

Congratulations @Natarajan_91 …that was just the interval-block of your biopic!

What a way to open the account la! ❤️😍

T Natarajan is having a dream start to his intl career. #Nattu #AUSvIND

Natarajan Thangarasu is a Tamilian who belongs to a small village named Chinnappampatti of Salem which is located 340 Kms away from Chennai. People of his place consider him as their “Chella Paiyan” as anyone would show directions to his house if we visit the area.

Natarajan’s father is a Saree weaver and his Mother ran a road side shop where people fell in love with her beef fry. He was the eldest of his five siblings. Everything he earned from cricket, Natarajan giving it back to the sports by running a free academy in his village. He doesn’t charge the 50-60 students who are learning the sport there. The academy is well received among the Tamil nadu players and is expected to get a wide reach from this year as he looks promising in his career.