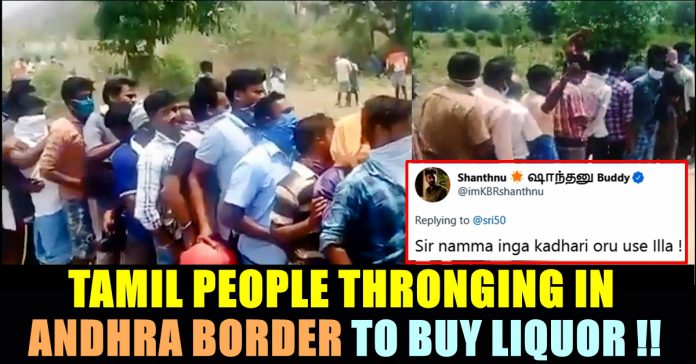 Due to the relaxation in lockdown implemented by the ministry of home affairs, large number of people gathered outside liquor shops in Bengaluru on Monday morning. The liquor shops in Karnataka will function from 9 AM to 7 PM. However the relaxation is not applicable in containment zones. This ruckus has forced authorities to place restrictions on how many bottles can an individual buy.

Here’s the line outside Tonique, a high-end liquor store on MG Road in Bangalore. Extended down to Lavelle Road near Rice Bowl. Growing longer by the minute. @thenewsminute #Lockdown3 pic.twitter.com/HUYAVbHdSg

People started forming queues from 5 A.M in the morning to buy liquor in the streets of Bengaluru. They started crowding various parts of the city including Indiranagar 100 feet road, central Bengaluru on MG road and Cunningham road in Vasanth road crowded. As there are high chances for the shops to get closed, people are buying liquor bottles as much as they can.

Shocked to see today’s scenes at #LiquorShops in Andhra Pradesh. Common sense says that people will throng in large numbers, but there is no contingency plan from @ysjagan nor is there a care for social distance. This comes amidst the steep rise in #Covid19 cases in AP pic.twitter.com/gaPigym896

The Karnataka government ordered certain liquor shops to open which were closed since 22nd of March. A single person is restricted to buy more than three bottles of spirits, six bottles of 650 ML beer or 12 bottles of 300 ML beer per person. A separate line for women was formed in a wine shop to help them maintain social distancing.

However, In tamilnadu, no state has lifted the lockdown on wine shops due to the vast increase in the numbers of popular corona cases , result of which people who belongs to Tamilnadu started forming queue in the border of Andhra Pradesh. As per reports, lots of people have crossed the border to Nagari in Chithoor district to buy liquor. Videos of the same incident shows, people violating the norms of social distancing to buy liquor.

This created huge outrage and more number of positive corona cases is expected in future.

One more video.. Distancing gone for a Toss.. pic.twitter.com/VnjRAiBbpL

Actor Shanthanu and Music director Thaman has expressed their disappointment over the behaviour of people. “Ppl thronging at liquor shops .. no social distancing … Everyone’s on the roads as usual behaving like #Corona is gone & dusted” The :Master” actor wrote.

Ppl thronging at liquor shops .. no social distancing … Everyone’s on the roads as usual behaving like #Corona is gone & dusted 😡 https://t.co/OzAS57kqWn

People also started travelling in Chennai it seems which is evident through the videos telecasted in news channels. On addressing the issue, Shanthanu said that there is no use in posting tweets as the entire responsibility lies on government on making people aware of the seriousness.

Sir namma inga kadhari oru use Illa ! The Govt has to take responsibility to keep ppl informed about the seriousness 😔😔😔