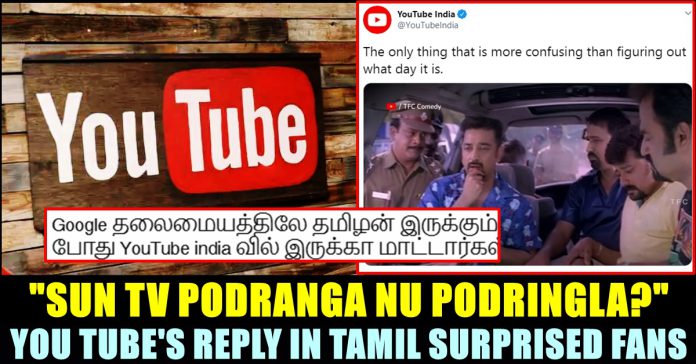 People are finding it strange to discover how time is passing nowadays. Due to this ongoing lockdown, the daily routines of people changed upside down. Many office goers who would know what day it is due to their scheduled plans and meetings during normal days, neglecting to care on such details due this vast change in their daily routines. Now, in a way of pointing out this unusual but most relatable fact, official twitter account of Youtube India, decided to compare it with a movie moment which will also help them to promote the movie which is streaming in their platform.

They compared it with the popular “Kannadi Munnadi” scene in Kamal Haasan’s “Panchathanthiram” as the full movie is streaming in youtube since past few days. Panchathanthiram is a movie with ensemble cast of having 5 male leads including Jayaram, Sriman, Ramesh Aravind, Yugi Sethu and Kamal Haasan. The film was directed by K. S. Ravikumar written with Kamal Haasan and Crazy Mohan. The film also features Simran and Ramya Krishnan leading an ensemble supporting cast that includes Urvashi, Ramesh Khanna, Aishwarya and Nagesh.

In that particular scene, Kamal Haasan and gang would confuse a police officer to distract him from discovering that they just disposed a dead body. The three words “Kannadi, Munnadi, Pinnadi” were repeatedly used in that scene by them to confuse the police officer which turned out to be one of an epic comedy scene in Tamil film history.

Now, posting a screenshot from the scene, Youtube India which nearly has 1 million followers in Twitter wrote “The only thing that is more confusing than figuring out what day it is.” as their caption. Check out their tweet below :

The only thing that is more confusing than figuring out what day it is. pic.twitter.com/PJHF7gmoNX

The most interesting part about this tweet is when Youtube India concerned to reply to a Tamil fan who questioned whether they are posting this to compete with SUN TV who are planning to stream the movie the next day. “Tom mrng 9:30 a.m. Panchathanthiram is gonna telecast in @SunTV .. Idhuku dhan potingala??” the follower asked to which Youtube India replied by in Tanglish.

The admin of this twitter handle said that they came to know about it only after uploading the post in Tanglish. “Idhu engalukku potta pinnadi dhaan therinjathu.” the reply of youtube India read.

To another follower who appreciated the taste in tamil cinema of Youtube India, it replied by saying “Just crazy about Crazy Mohan”

This reply from youtube India grabbed the attention of the Tamil speaking followers of it. “We have a Tamilian in Google head office, won’t we have one in Youtube head office?” wrote one of follower whereas another one appreciated the reply of Youtube India by writing “Your Thanglish is good”

Check out their replies below :

Your Thanglish is good @YouTubeIndia