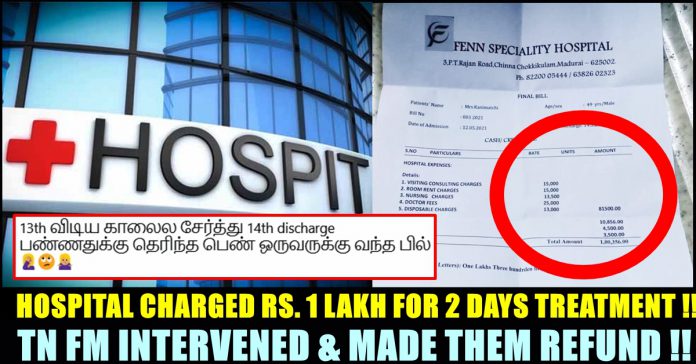 Tamil nadu finance minister Dr. P. Thiaga Rajan intervened and director the collector of Madurai to take appropriate action regarding a complaint that emerged in social media against a private hospital that is located in Chinnachokkikulam, Madurai which charged Rs. 1 Lakh for one day of COVID 19 treatment. After Mr. Rajan retweeted a picture of the bill in Twitter by urging Madurai collector Aneesh Sekar to take action, the hospital refunded the excess amount to the patient.

However, the hospital had still charged around Rs. 20,000 in excess as per the rules laid down by the Government order. As a result of it, Mr. PTR, in his latest tweet, has said that he has decided to emphasise the private hospitals to charge the amount announced by Chief minister MK Stalin.

Reports suggests that the patient was tested positive and had lung involvement as per the CT reports. She was given oxygen support during the two days of her stay in the hospital. The hospital asked the family members of the patient to purchase the antiviral drug Remdesivir from outside as they didn’t have the stock. The family members decided to get the patient discharged angrily, according to sources.

“We are not charging exorbitantly and have proper records for all the drugs and medications administered on her during the treatment.” the hospital management said. They also mentioned that the mention of sex as male is a typographical error. Sharing the picture of the bill, active social media user and journalist Sonia Arunkumar uploaded a tweet in her twitter timeline.

Sharing the news, Mr. PTR, in his tweet said “Thanks to the collector who took immediate action regarding the complaint that emerged in social media. We have decided to conduct a meeting with the private hospitals of Madurai again to emphasize on charging the amount announced by Chief minister MK Stalin”

Previous articleBalaji Murugadoss Returned The Award He Received From Behindwoods !!
Next article“Honest Ones Never Gave Interviews After Elimination” – Anitha Of “Bigg Boss” Fame