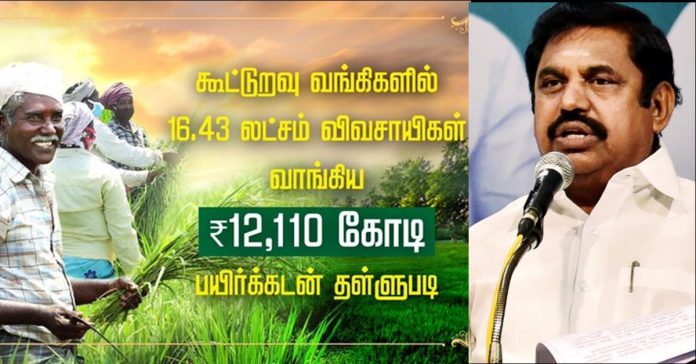 On Friday, the AIADMK led Tamil nadu government has announced waiver of Rs. 12, 110 crore farm loans that was received by 16.43 lakh farmers from cooperative banks. Chief minister Edappadi K Pazhaniswamy said that the scheme would come into immediate effect to reduce the burden on debt-ridden farmers who are currently affected by the COVID 19 pandemic, two cyclones such as Nivar and Burevi in the state since November and the monsoon.

Chief minister Edappadi K Pazhaniswamy who identifies himself as a farmer, always said that he knows the hardship of a fellow farmer. Now, in a way of reducing their burden, he removed Rs.12, 110 crore loan from the cooperative banks taken by 16.43 lakh farmers. The announcement was made on Friday during the last day of the assembly session.

It is notable that the notice was issued to the farmers affected by the Nivar and Burevi storms. “I am also a farmer, I’ve a lot of affection for farmers,” said Chief minister Edappadi K Palaniswami. “It is my responsibility to help farmers to continue their work.” In 2017, the government had provided ₹2,247 crore as relief to drought affected farmers, he added.

Here’s the tweet uploaded by Chief minister Edappadi K Pazhaiswamy regarding the same :

He also added that the AIADMK was the only party that fulfills promises and also comes up with fresh welfare measures. The AIADMK government was the only government to waive agricultural loans for the second time. Farmers and agricultural associations have expressed their happiness and welcomed the move of the ruling government.

Previous articleRihanna Got Rs. 18 Crore To Post That Tweet ?? Kanagana Tweets
Next articleVaughan Criticized India’s Decision Of Not Including Kuldeep Yadav !! Check The Replies He Received

In the middle of quarantine, Mia Khalifa found some time to roast those who are trying to body shame her. The 27 year old...

The Most Awaited Response Of Kamal !! Here’s What Fans Demanding From Him !!

Ram cinemas located in Tirunelveli is very much known their interaction with the followers in Twitter. Theatre owners interacting with followers is not new...