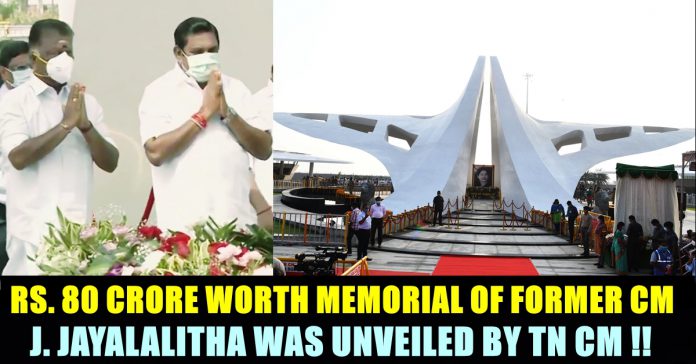 While delivering his speech at the special event, Chief minister Edappadi K Pazhaniswamy remembered the statement uttered by former Chief minister J. Jayalalitha at the Tamil nadu Legislative Assembly. She said that no one could defeat ADMK party even after 100 years as it is a fort made of steel.

“We should win the upcoming election with majority and should continue the governance of Jayalalitha” Chief minister Edappadi K Pazhaniswamy took oath at the event. After hearing his speech, supporters of ADMK party expressed their happiness by applauding. People started visiting the event since morning. Millions of people who visited to pay respect to the former chief minister, were allowed to visit the memorial. As it is a memorial made for the permanent general secretary of ADMK, supporters of ADMK party made their presence to pay respect.

The arrival of millions of supporters has given new impetus to the AIADMK. It is notable that all the supporters of the ADMK party have united to pay homage to their leader in one place.

Check out some of the special features of the Memorial :

The memorial of the late Chief Minister Jayalalithaa is placed in an area of ​​9.09 acres. With the help of a team of the Structural Engineering Department of IIT-Madras, the memorial hall was designed with reference to a phoenix bird. To resist getting damaged by the salt air, concrete surface were laid for the memorial. The museum is spread over an area of ​​8555 square feet with excellent architectural design in which various wax statues and photographs were installed.

The sides are studded with high quality marble and the floor with high quality black stones. A park is located on an area of ​​about 8500 square feet in the memorial complex to improve skills and knowledge of people who are visiting it. It also has a 110-foot-long walkway on either side.

Solar storage panels are installed on pavement roofs to generate electricity as well. To attract the visitors, water pools are set up with excellent garden art. Plants and trees have been planted to beautify the monument. With the suggestions of horticulturists, Miyawaki Garden is made up of a variety of native trees in the memorial.

In the entrance, a bronze statue of late chief ministers J. Jayalalitha and M.G. Ramachandran were installed. At both the outer entrances of the monument, a stone statue of a male lion is placed. Electric facility, decorative colored electric lights and Surveillance camera facilities have been established in the memorial. “Anaiyaa Vilakku”, a traditional pooja lamp covered at the top, which can be lit for longer hours is also installed at the memorial of former chief minister J. Jayalalitha.

Dinesh Karthik and Varun Chakravarthy of Kolkata Knight Riders has made headlines several times for their on field chatter in Tamil language. Now, a...