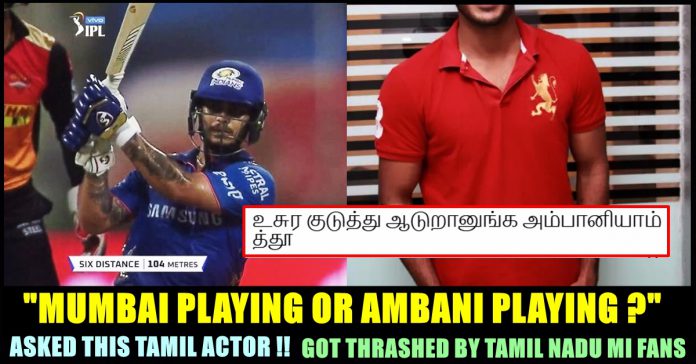 Tamil nadu Based Mumbai Fans Thrashing This Celebrity For His Tweet Against Mumbai !!

“I feel in this tournament, any team is capable of beating anyone. Kolkata Knight Riders is playing before us and we will know exactly what to do” said the Mumbai captain Rohit Sharma in the post match presentation after winning Rajasthan Royals. However, in the match against Kolkata Knight riders, Rajasthan Royals faced a huge loss. Chasing 171 runs, the team scored only 85 runs. With the win, net run rate of the Morgan team increased and they sealed their fourth spot in the table.

Prior Match 55, Mumbai needed to win their match against Sunrisers Hyderabad by a margin of 171 runs. Sadly, it is the only scenario for them to qualify. Mumbai would have been eliminated if SRH batted first by winning the toss. So, the blue team were required to score 300 plus runs after winning toss and restrict SRH within 120 runs to qualify for the playoffs.

Keeping the possibilities in concern, MI opener Ishan Kishan started firing right from the start. He smashed 84 runs in just 32 deliveries. Surya Kumar Yadav also batted well for his 82. The team managed to 235 runs at the end of 20 overs. They were required to restrict SRH within 65 runs to qualify for the playoffs. The Manish Pandey led team effortlessly reached the score in their 6th over and officially eliminated Mumbai Indians from the tournament.

While Mumbai were firing during their batting innings, Dance choreographer Sathish Krishnan who was watching the match, uploaded a tweet asking whether Mumbai are batting or Ambani is batting, denoting that the blue team used money and bought opponents or umpires to score huge sum of score. “Mumbai Indians playing or ambani playing ???” he asked through his tweet.

Stop watching cricket bro pls if it's bothering you ,noone's forcing you.. if you can't appreciate good cricket them pls just stfuu. https://t.co/8MkRtyBRT7

Ya they did this 3 times earlier against csk too in finals. Beggars took a few coins and lost deliberately. https://t.co/cmMtppvIDK

As far as the match is concerned, SRH scored 138 runs in 13.1 overs and need 97 runs in 40 balls. Manish Pandey and Priyam Garg are at crease with Mumbai bowlers trying to win the match at least. Comment your views on Sathish’s tweet and the reactions it received !!

Previous articleBollywood’s Top Celebrities Supported Aryan Khan Who Got Arrested In A Drug Case !!
Next articleAvesh Khan Became A Victim Of Severe Online Troll For Laughing At Bharath In The Last Over !!

We all have witnessed people losing lives, shifting their professional fields, seeking medial requirements in social media platforms, suffering due to mental depression due...

Actress Kiran, through her official Instagram handle, shared about a traumatic experience she went through during one of her recent shoots. The actress said...

Kamal Haasan returns as a host yet again for the reality show, Bigg Boss Tamil 3. The much-anticipated reality show kick-started on a high...