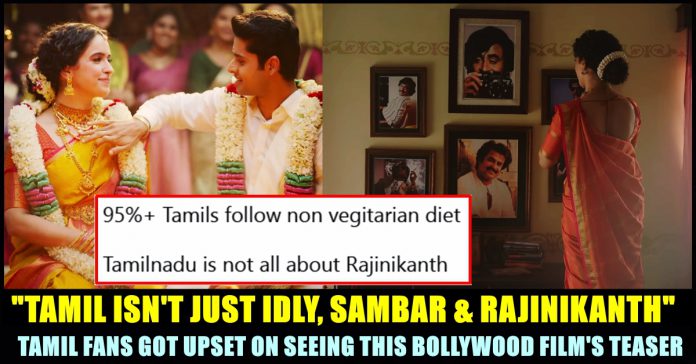 On Tuesday, Netflix debuted the teaser of Meenakshi Sundareshwar, an upcoming romantic comedy starring Sanya Malhothra and Abhimanyu Dassani which is being produced by Karan Johar’s Dharmatic Entertainment. The film which appears to be steeped in Tamil culture, is going to encapsulate the various interlinked aspects of relationships, joint families, the awkwardness in a new marriage and everything in between, according to the official logline of the film.

Though, neither of the actor is of South Indian parentage, the film is set in Mdurai, Tamil nadu. The teaser suggests Abhimanyu playing the role of an engineer who feels he can be a perfect husband as his job teaches him never to give up. Sanya played the role of a feisty woman who likes making nervous people, “more” nervous. The two meet in an arranged marriage setup and through the case of the teaser we see them fall in love, get married.

The film marks the debut of Vivek Soni and he handled how newly weds navigate long distance insecurities, their love and the dramas that come with every new marriage. The teaser which was made with a heavy reference of Superstar Rajinikanth, ends with a Rajini fan who is left speechless after finding a out her fiance doesn’t like films. Watch the teaser below :

The teaser disappointed a number of Tamil fans who got upset over the makers for linking Tamil nadu, only with actor Rajinikanth and his films. “Typical Shitty Stereotyping of Tamil nadu by Bollywood & No offence , Why always RAJINIKANTH reference ? Its exhausting to see the stereotypical portrayal of TAMIL people in Bollywood movies” a fan said whereas another one wrote “Tamilnaadu na athu brahmins mattum thaaanada? Thirunthungada”

& No offence , Why always RAJINIKANTH reference ?😑
Its exhausting to see the stereotypical portrayal of TAMIL people in Bollywood movies .#Valimai #AjithKumar https://t.co/KJntVUxIRD

Why is it always, two dialogs about rajini and its a Tamil culture film?🙄 https://t.co/aenHa7LWlb

Is this a Kalyan Jewellers commercial? Why are all the actors just models and not actors? What the actual fuck is this? https://t.co/hEiMkL1miB

Couldn’t cast actual Tamil actors, still thinks Rajnikanth is the only star that Tamil people love, an engineer joke and a general air of cringe around the whole thing👏🏼👏🏼👏🏼

How about stick to producing stuff that you know, eh @NetflixIndia @Dharmatic_ ?? https://t.co/0SxGvbI590

What rubbish is this…If you people don’t know anything about Tamilnadu then come and learn…😣 You are clearly mixing chettinadu culture with Malayalam scenario… For your kind information this film didn’t match even 1% with TN culture…😒 https://t.co/sISnih94N3

why does hindi people think rajinikanth is the only star in tamil nadu , ella padathalayum avaru vechi thaan otringa https://t.co/xTHaehZNnY

Hardly anyone speaks Hindi in Madurai

Tamilnadu is not all about Rajinikanth

Nobody sells Idli in open at Madurai Railway station

These 100% imaginary characters of North Indian creators who absolutely have no knowledge about Madurai. https://t.co/POIlO5ckmQ

Its 2021 and Tamil Nadu still looks like this from up North https://t.co/vptMDht0hV pic.twitter.com/Przt8tB5St

for the last time no South Indian woman of current generation wears saree at home. This Rajnikanth reference in any hindi content that's loaded with stereotypes is just annoying. Shame! https://t.co/PLXesRHgL8

Previous articleKarthik Of BJP Opened On Getting “Only One Vote” In Local Body Election !!
Next article“Stay In Your House If You Want Privacy” – Video Of Arjun Bashing Contestants In “Survivor” Show

Actress Pranitha Subash of "Masss" fame who recently gave birth to a baby girl, confronted the statement made by Sai Pallavi by uploading a...