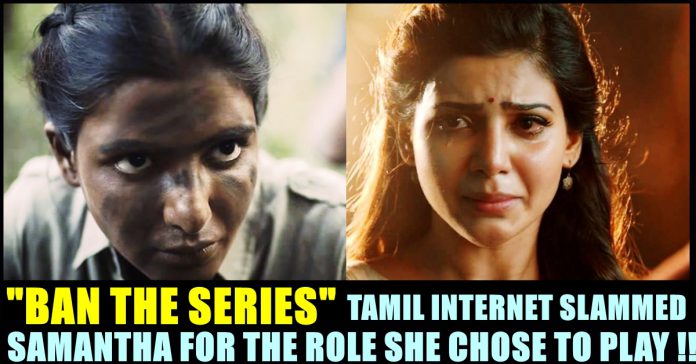 As soon as the trailer of “The Family Man 2” released in youtube, reactions praising Tamil nadu based actress Samantha Ruth Prabhu flooded the social media platforms. Along with thousands of fans, Samantha’s husband and Telugu Superstar Naga Chaithanya, Bollywood actress Kangana Ranaut heaped praise on the 34 year old actress. However, a set people started expressing their disappointment over the “Kaththi” actress for taking up a role of an extremist from Tamil roots. Hashtags such as “Family Man 2 Against Tamilians” were trending in the micro blogging social media site since the evening of Tuesday.

Throughout the trailer, we could see Samantha wearing the uniform of the Liberation Tigers of Tamil Eelam (LTTE). The dialogues also suggests that there is a hostage situation in Chennai. It has been reported that most part of the website is taking place in Chennai. LTTE also known as Tamil tigers is an organisation that attempted to establish an independent state for Tamils named “Eelam” in Sri lanka.

“FamilyMan2_against_Tamils tag trending . Hope Samantha has not done the grave mistake of standing against her own people.” said popular Tamil movie reviewer Prashanth in his tweet whereas another Twitter user wrote “Tamil people’s are not extremists, we love peace ☮️Don’t project us as extremists”

#FamilyMan2_against_Tamils tag trending . Hope @Samanthaprabhu2 has not done the grave mistake of standing against her own people.

Tamil people’s are not extremists, we love peace ☮️

Speaking in Jaffna dialect Samantha is shown as having come to carry out an armed attack in Chennai. Coming in between the ’LTTE Tigers' uniforms!#FamilyMan2_against_Tamils pic.twitter.com/DDqz8JwHmj

Remember @PrimeVideoIN , Tamils are not just about Indian market. We have a huge Tamil diaspora. Tamil Nadu is one of the state with highest Internet penetration too. Need a statement on #Familyman2 showing Tamils as terrorists. #Familyman2_against_tamils

Throughout the world while Tamils are commemorating the Tamil Genocide, @rajndk
& @Samanthaprabhu2 a someone who should know better about the ethnic conflict, decide to release a trailer that project Tamils as terrorist, & Tamil resistance as terrorism #FamilyMan2_against_Tamils

Dear Indian movie directors and actors, you have successfully made the word 'Muslim' synonymous to terrorists and helped RW. Now, Do you want the same with Tamils? Be ethical. Be Responsible. #FamilyMan2_against_Tamils@PrimeVideoIN @Samanthaprabhu2 @BajpayeeManoj

Did you know what?

We Tamils suffering a lot from 1953 to till date of sinhala racism and facist government.

However, there is no official clarification or reaction from the makers of “Family Man 2” yet. Meanwhle, Samantha has been thanking people who lauded her for the role she chose to play in the web series. Comment your views on the trailer and the reactions it is receiving !!

Sandy, Sherin, Kavin, Losliya, Tharshan were the five of the contestants among the six who got nominated for eviction this week. Kavin walked off...

"Nanban", a remake of Bollywood's blockbuster film "3 idiots" was released in the year 2012. With Vijay replacing Amir Khan, Jiiva and Sri kanth...