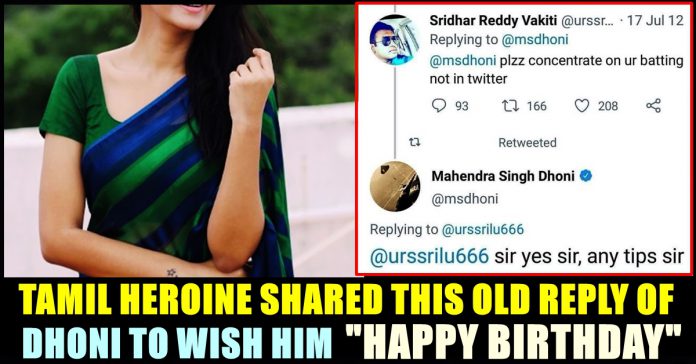 On Wednesday, former Indian captain Mahendra Singh Dhoni turns 40 and is receiving wishes from across the country. Several cinema celebrities, players of Indian cricket team and other teams, Politicians, influential personalities from various fields are wishing the “captain” cool on this special day of him. Interestingly, Tamil actress Priya Bhavani Shankar shared an old tweet of Dhoni and wished him for his birthday. In the screen shot she shared, we could see the captain roasting a twitter user who advised him to concentrate on his batting.

Dhoni, the cricketer who debuted to International cricket in the year 2004, made his last International appearance in the semi finals of 2019 world cup tournament. He who enjoys a huge fan following across the globe, loves outsmarting the opposition with his quick thinking, innovative field settings and clever bowling changes. Known for his calm and composed nature, MS Dhoni has gained a nickname “Mr.Cool” or “Captain Cool” for keeping himself calm in the field, unlike other captains.

Not only in field, Dhoni proved himself as the “coolest” even off the field. In the year 2012, the cricketer uploaded a promotional post in his official twitter account and a fan had the courage of advising him to concentrate on batting instead of spending time in Twitter. “Please concentrate on your batting, not in Twitter” the fan said by replying to post uploaded by Dhoni on 17th July, 2012.

Without losing his nerves, Dhoni, replied to the user with a sarcastic reply. “sir yes sir, any tips sir” Dhoni’s reply read and the tweet is going viral among the users of social media till today. Here’s the screen shot :

Dhoni is currently participating in Indian Premier League and is representing team Chennai Super Kings as a captain. The cricketer announced his retirement from International cricket on 15th of August 2020 through an Instagram post by adding a classic song of Amitabh Bhachchan unlike other prominent cricketers. Under Dhoni’s captaincy, India won the inaugural 2007 ICC World Twenty20, the 2010 and 2016 Asia Cups, the 2011 ICC Cricket World Cup and the 2013 ICC Champions Trophy.

He is widely regarded as one of the greatest wicket-keeper batsmen and captains in the history of the game. He was also the first wicket-keeper to effect 100 stumpings in ODI cricket. Dhoni has been the recipient of many awards, including the ICC ODI Player of the Year award in 2008 and 2009 and became the first player to win the award twice, the Rajiv Gandhi Khel Ratna award in 2007, the Padma Shri, India’s fourth highest civilian honour, in 2009 and the Padma Bhushan.

Previous article“Vismaya & Chithra Went Through The Same” – Tamil TV Actress
Next articleWATCH : Know How Vijay Reacted After Seeing Kavin As An Assistant Director Of “BEAST” ??

In yet another shocking incident a 61-year-old Malayalam actress has lodged a rape complaint against a 37-year-old man named Siya. The actress is known for...

A number of contestants shed tears when Kamal Haasan announced that actress Rekha is getting eliminated from the show. Shivani Narayanan, Balaji Murugadoss, Rio...

Followed by "Don" and "Kantara", "Love Today" joined the list of movies which became a blockbuster during it's theatrical run but didn't go well...