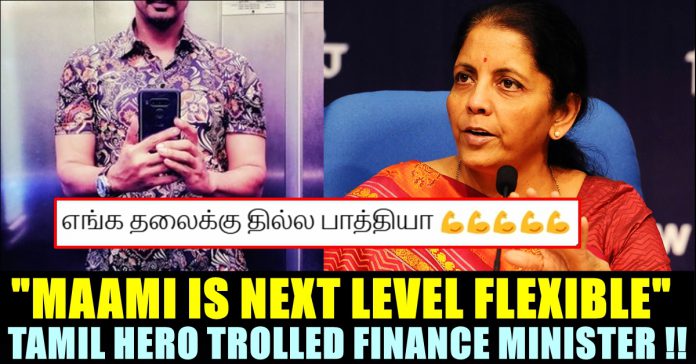 Tamil Hero Trolled Nirmala Sitharaman For Her Statements About Petrol Price Hike In 2013 & 2021 !! MUST WATCH VIDEO

The hike in petrol price has been causing angry reactions against the ruling government in the centre. Followed by the netizens, actor Siddharth who is known for raising voice against the BJP government, has uploaded a tweet trolling Finance minister Nirmala Sitharaman. Sharing a video which compared her speech in the years 2013 and 2021, The actor said that Nirmala Sitharaman is very much flexible in her belief system and referred her as “Maami” to troll her.

On a day when petrol crossed the Rs. 100 mark, Prime minister Narendra Modi blamed the previous governments for not focussing on reducing India’s energy import dependence. “I do not want to criticise anyone but I want to say [that] had we focused on this subject much earlier, our middle-class would not be burdened,” PTI quoted PM Modi as saying. PM Modi further said it was a collective duty to work towards clean and green sources of energy as well as energy independence.

However, people are criticizing the current government for the immense hike in the petrol price. In a video shared by actor Siddharth, Nirmala Sitharaman could be seen saying that Union Government is the reason behind the hike in petrol prices in the year 2013. She said that the congress government in the union ministry is troubling the citizen by increasing the petrol price.

However, in a recent statement, she said “It is the oil marketing companies in India who will have to say whether they want cut it down or whether they have to go up because technically, the oil companies have been freed. Government has no control over it. It is the marketing companies which import the crude, refine it, then distribute it and put the costs for logistics and everything else”

Maami is next level flexible in her belief system. No onions, no memory, no principles. Maami rocks! https://t.co/4WZ791m1HV

When a follower asked Siddharth why he is disrespecting Nirmala Sitharaman by calling her as “Maami”, the actor said that her would call her that way if I met her and spoke to her in Tamil. “To me it’s no different than Chacha Nehru. Thanks.” his tweet read.

With due respect sir, there is nothing undignified or demeaning about the word Maami. I have used the word all my life. It's what I would call her if I met her and spoke in Tamil. To me it's no different than Chacha Nehru. Thanks. https://t.co/R2P5SkJwdg

Siddharth recently grabbed headlines for shutting down a BJP leader by sharing an old mail she sent to him. Read : Siddharth’s Fitting Reply To A BJP Woman Who Termed Him As A “School Drop Out” !! Check out some of the reactions for this recent tweet of the “Boys” actor :

This time she can honestly say that ” I don’t drink petrol, we aren’t from a fuel drinking family “

Well said bro, this woman has had zero empathy in addressing the common man’s concern over price rises. Her statements about onions, petrol, gas cylinder, only show her total disrespect and arrogance towards the common man.

VJ Archana who is known for appearing in Vijay TV's "Raja Rani" serial, reacted to the comment dropped by Chinmayi in one of her...

Veteran actor Mohan, while meeting the press reporters recently, responded to a question of a reporter who asked whether he watched director Atlee's "Raaja...

Sweet Revenge Of Rishab Pant Goes Viral !! Gives Back In A Style !!

Australian captain Tim Paine continued his chatter with Indian batsmen from behind the wickets and this time it was Rishabh Pant who heard continues...