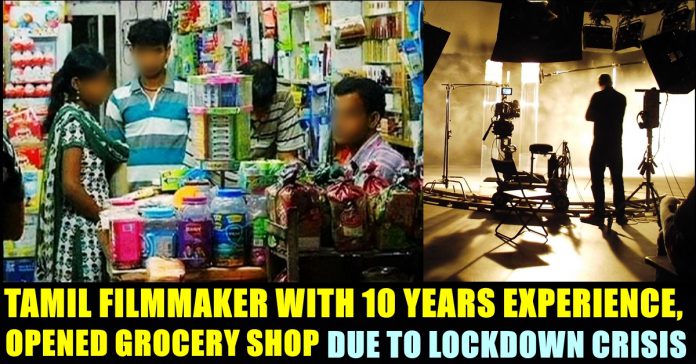 All of our plans to improve our financial status in 2020 tumbled in front of our eyes due to this Lockdown implemented by our government as we are having a deadly virus which killed more than 4 lakh people across the world at our doorstep. Many people are looking for alternative ways to stay afloat in this Global pandemic. We are even witnessing people who are switching careers altogether to survive. But we never thought that an individual who worked as a main man in a number of films, will be forced to open a grocery shop for survival.

After working in the Tamil film industry for 10 long years, Anand was hoping to return to the film industry until he realized that the movie theatres in the country will take at least 1 year to open. He who thought of involving in any other business, started a grocery shop in Chennai’s Mowlivakkam to face his financial expenses. Using his savings, the filmmaker rented in a building from his close friend and started operating the store.

“During the lockdown period, I was simply confined within my house. When I came to know that grocery and provision shops have been allowed to open in Tamil nadu, I decided to open one for me. I sell all products including oil. pulses and rice that too at a very less price to get more buyers” said Anand who added that he is very much happy doing this.

“I don’t see the future of unlocking film industry this year because people’s fear has to go away in the first place. Movie theatres will open only after opening up malls, parks and beaches. We have a career in film industry only after these things settle down, until then I will be here at my grocery store” the filmmaker said who is known for making films like “Oru Mazhai Naangu Saaral”, “Mouna Mazhai” and few others. His film “Thuninthu Sei” which is in the final stages of production, got interrupted due to the Lockdown crisis. “Just two songs are pending” said the filmmaker while addressing about his next project in film industry. High budget filmmakers and producers are also suffering due to this issue and many of them starting thinking of releasing their films in OTT platforms to clear debts. Two mainstream films, “Ponmagal Vanthaal” and “Penguin” got released in OTT platforms and many other are in talks. Vijay and Suriya’s high budget films “Master” and “Soorarai Pottru” which were supposed to release in April and May respectively were also postponed.