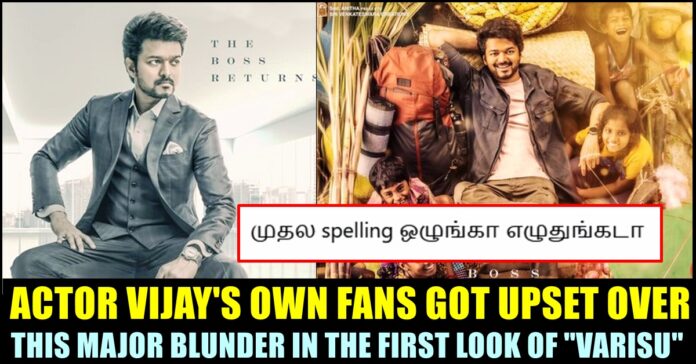 After the first look of “Varisu” got released, several kind of reactions are surfacing in the internet. While a set of online users complain about the background image being extracted from google result, others said that the posters doesn’t have the mass appeal of a Vijay film. However, most of the fans expressed their displeasure over the makers making a blunder in the spelling in the title. Claiming that the Tamil word “Vaarisu” contains two “a” s, fans blamed the poster designer and filmmaker Vamsi Paidipally for committing the major blunder.

The most awaited first look of Vijay’s 66th project got released a day ahead of his 48th birthday. Titled as “Varisu”, the poster is receiving mixed reactions from the online fans as the film incidentally became the actor’s one of the most less hyped movies in recent times. The poster showed Vijay donning a coat suit in the background which is seemingly a foreign country. “The Boss Returns” read the caption under the title “Varisu which is expected to be Vijay’s come back movie due to the disappointment “Beast” provided to his fans.

Actor Vijay shared the title look in his official twitter handle and the post garnered 100k plus likes in no time.

On seeing the poster, a fan said “Team #Varisu. Kindly do change spelling mistakes in Movie Title. It is supposed to be #Vaarisu not #Varisu. Tamil la title vechathu santhosma but correct the spelling mistakes” through his tweet whereas another one said “ennada “Varisu” la innoru ‘A’ vah kanom.!?”

my ocd kicking in looking at “varisu” having single a instead of double a.pic.twitter.com/dcGszF6e6t

Team #Varisu
Kindly do change spelling mistakes in Movie Title. It is supposed to be #Vaarisu not #Varisu.

Varisu is a disaster even before it’s release, starting from the spelling of the title.

Shouldn’t it be Vaarisu? Varisu doesn’t seem like the right spelling.

Leave the poor poster, atleast spelling could have been correct. It’s Vaarisu and not Varisu. Tamil la poster vitrukalam 😴😴

Varisu is that correct 😂😂

Directed by Vamdi Paidipally, the film’s ensemble cast includes, Rashmika Mandanna, Sarathkumar, Prabhu, Prakash Raj, Shaam, Srikanth, Samyuktha, Khushbu, Yogi babu and others. Dil Raju is producing the film under his own banner “Sri Venkateshara Creations”. The film is expected to release around January 2023. Post “Varisu”, Vijay has reportedly committed director Lokesh Kanagaraj to direct his next film which is tentatively titled as “Thalapathy 67”. Comment you views on the first look of “Varisu”.

Anantha Kannan, Most Loved Anchor Of 90s Kids Is No More !! Internet Mourns

Anandha Kannan, one of the popular anchors of Sun network's prominent music channel Sun music during early mid 2000s, passed away after fighting for...